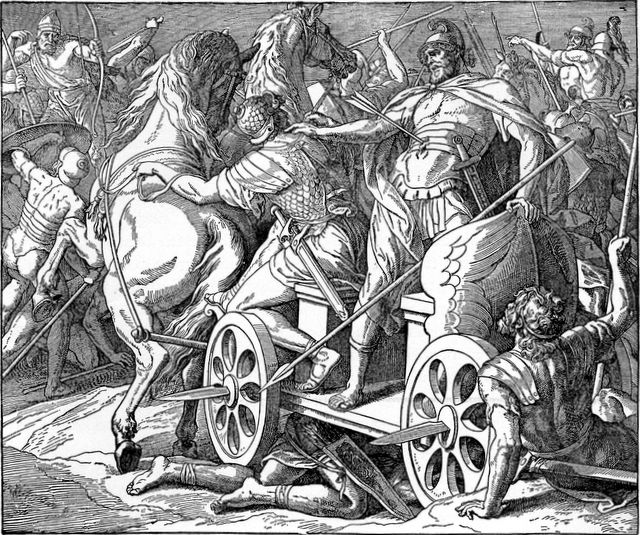 And a certain man drew a bow at a venture and smote the king of Israel between the joints of the harness….” (1 Kings 22:34a).

Old Testament scholar Dale Ralph Davis describes the theme of this chapter as “the word of God destroys the man who defies it” (1 Kings, 311).

As King Ahab went into battle, he took off his royal robes in order to hide his identity and not draw the attention of the Syrians. This illustrates his cunning, his shrewdness. He had fooled the army of the Syrians. There was someone, however, whom he had not fooled. There was someone who knew his identity, better than any facial recognition system or DNA test. Someone who knew his location, with greater precision than any GPS could provide. Someone who, in fact, knew every inch of his body and even where there was a tiny gap of vulnerability where one piece of his armor was joined to another.

Christ encouraged his disciples by telling them that the very hairs of their head were all numbered (Matt 10:30). That is comforting to know, but also frightening. He knows us and we cannot hide from him.

Notice in v. 34a, “And a certain man drew a bow at a venture….” It was just a random, unnamed man, who became the instrument of the Lord’s judgement upon Ahab. He drew his bow “at a venture.” We might say, “by chance.” He was not even aiming, but behind the human archer, there was a Divine Archer, who would guide that missile. And it smote the king of Israel “between the joint of the harness.” It land just at the tiny point of weakness.

If you are familiar with Greek mythology this account might bring to mind the death of the hero Achilles. As an infant, he had supposedly been dipped into the river Styx by his mother Thetis, giving him invulnerability over his whole body, except at the heel where he had been held to be dipped. Then, in battle an arrow fatally struck him in his “Achilles’ heel.” Sometimes even the pagans could grope however blindly toward recognition of the guiding hand of divine providence.

Was it dumb luck that Ahab was struck? No, it was the hand of a providential God. The Lord was bringing his temporal judgement to bear upon Ahab for all his sin and idolatry, and for all the spiritual misery he had brought upon his nation and people. There are no accidents in this life.

1 Kings ends with a warning. Men will either obey the Word of God or they will be crushed by it. Consider Christ’s words in Matthew 21:44, “And whosoever shall fall on this stone shall be broken; but on whomsoever it shall fall, it will grind him to powder.”

Will you be like the many that go to destruction, or the few who find life in Christ?