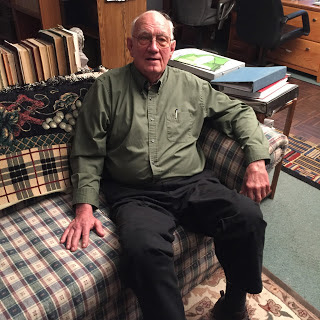 There will be a private funeral service and burial on Saturday.

My response to Andy:

Very sorry to hear of Lloyd’s passing. Hard to believe. A good and godly man whom I have admired, as have many others. Jackie and the Providence brethren will be in our prayers.

In God’s providence, this news comes on the eve of the Keach Conference, a meeting which Lloyd regularly attended, and where he hosted a book table with Baptist and Puritan works from Sprinkle publications.

I looked back through my blog for a few posts where Lloyd appears:

2012 Keach Conference where Lloyd was one of the speakers, giving a message on “Total Depravity.”

I also recorded a podcast interview (WM 42) with Lloyd in 2015, not long after he had suffered a stroke and retired from his role as founding pastor of Providence BC, which he had served for 53 years. Lloyd's Sprinkle Publications is known all over the world by theologians and historians for its reprints of Puritan, Reformed, and historical (Southern) literature.

With thanks for Lloyd’s life and ministry. To God be the glory.

Thank you for this article and especially the link to the post in 2010. I have several Sprinkle Publication books and have greatly appreciated Bro. Sprinkle's work and ministry.

Thanks for the comment Sean. It's hard to believe that Lloyd is gone from this world, but his influences lives on through the books he left behind. SDG!