The Vision (9.6.19): Jeroboam and the Regulative Principle of Worship 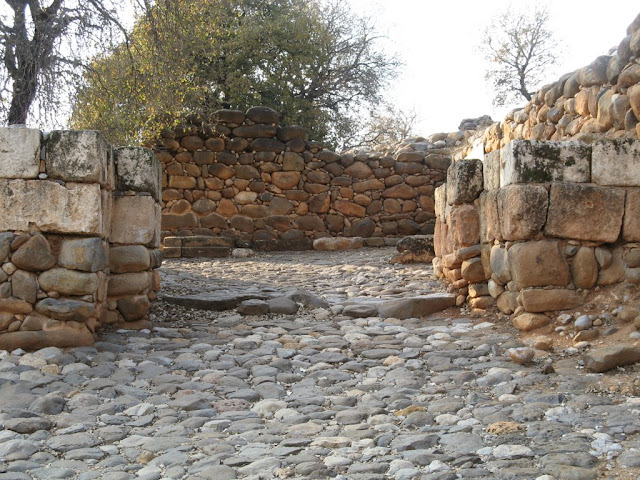 Image: Remains of the ancient city gate at Dan in Northern Israel.

And this thing became a sin: for the people went to worship before the one, even unto Dan (1 Kings 12:30).

In Reformed theology the Regulative Principle of Worship (or RP) refers to the idea that worship should be regulated by Scripture. That is, we should not introduce any element into our worship unless we can find direct command or warrant for it in Scripture.

1 Kings 12 provides a vivid example of the violation of the RP in ancient Israel.

At that time, the Lord had decreed that he would be worshipped in one central place, the temple in Jerusalem. The building of this temple had been one of Solomon’s greatest achievements and reflected the triumph of the RP. But when the ten Northern tribes of Israel under Jeroboam broke away from Judah and Benjamin under Solomon’s son, King Rehoboam, all this was undone.
Rehoboam’s took a series of ungodly actions driven by political motivation and lack of trust in God (cf. 1 Kings 12:26-27):
First, he set up a false place and object of worship: the golden calves at Dan and Bethel (vv. 28-30). This violated the second commandment by making graven images. It violated Deuteronomy in abandoning the temple in Jerusalem as the true place of worship. Notice v. 30a: “And this thing became a sin.” Worship can be sinful if it is not worship that is done in obedience to the command of God.
Second, he set up false priests (v. 31). He put men into the priesthood who were not Biblically qualified, because they were not sons of Levi.
Third, he set up a man-made holy day (vv. 32-33). He created his own feast, a pseudo holiday made in imitation of true feasts that had been ordained by God. This holy day was one “he had devised in his own heart” (v. 33).
This spiritual degeneracy and compromise eventually led to the undoing of this North Kingdom of Israel, though it would take many years to be played out.
We are left to ponder:
Have we set up false objects of worship?
Have we been driven by pragmatism, convenience, and personal preference in worship, rather than obedience?
Have we compromised on Biblical standards for church officers?
Have we created worship practices or “holy days” that we have devised in our own hearts?
May the Lord direct us to purify our worship and to regulate it according to his Word.
Grace and peace, Pastor Jeff Riddle