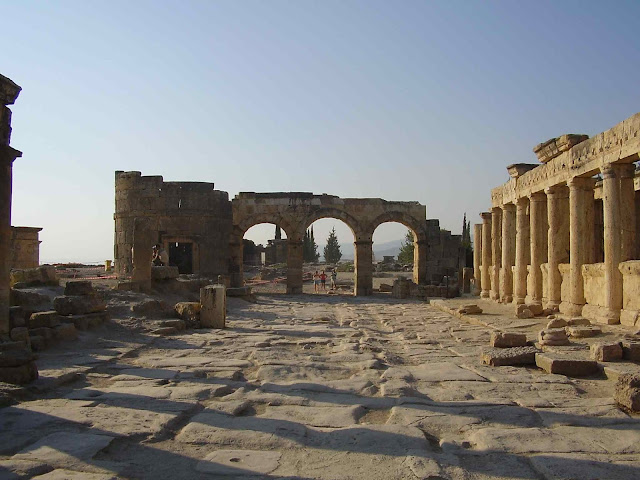 Image: Colonnade in the ruins of ancient Hierapolis ("holy city") near the modern town of Pamukkale in western Turkey.

A new episode is posted to the series on Eusebius of Caesarea’s The Ecclesiastical History: book 3, chapter 39. Listen here.

The focus in this chapter is on the writing of Papias of Hierapolis (c. AD 60-130).
Eusebius says that Papias was the author of five treatises under the title, “Interpretation of the Oracles of the Lord.” This work is no longer extant except in quotations from Eusebius and Irenaeus.

He notes that Irenaeus described Papias as “the hearer of John, who was a companion of Polycarp and one of the ancients.”

Eusebius notes, however, that Papias himself did not say he was “a hearer and eyewitness of the sacred apostles” but that he had learned from those who knew them.

He cites a passage in which Papias says he was diligent in learning from the followers of the apostles and other disciples of Jesus, mentioning Andrew, Peter, Philip, Thomas, James, John, and Matthew, but also Aristion and the presbyter (elder) John.

He quotes a controversial statement of Papias in which he says he did not consider that he would profit so much “from books” as from “the word of a living and surviving voice.”

Eusebius also notes the mention of two Johns by Papias: John the Apostle and John the Elder, suggesting the possibility that the latter, John the Elder, was the author of Revelation.

He relays other traditions, including one related to the daughters of Philip the Apostle (Confusion with Philip the Evangelist?) at Hierapolis and the raising of a corpse, as well as an account of a tradition of Justus Barsabas drinking poison but suffering no harm (cf. Mark 16:18).

He also notes “unwritten tradition” conveyed by Papias that included “some strange parables and teachings of the Saviour, and some more mythical accounts.”

Among these accounts he mentions the teaching of a millennial kingdom. Eusebius accuses Papias of misreading mystical and symbolic accounts of the apostles, since he was a man “of very little intelligence.” Yet, he influenced others to hold such views, including Irenaeus.

He also records Papias’s description of the evangelist Mark as “Peter’s interpreter” who recorded the apostle’s remembrances accurately but not “in order.”

Of Matthew, Papias says, the evangelist “collected the oracles in the Hebrew language [dialect], and each interpreted as best he could.” This has led to questions about whether Matthew’s Gospel was originally written in Hebrew or Aramaic.

He adds that Papias cited from 1 John and 1 Peter.

Finally, he refers to a story of a woman “accused before the Lord of many sins” recorded in the Gospel according to the Hebrews. It has been speculated that this refers to the pericope adulterae (John 7:53—8:11) and lends credence to this as a popular Jesus tradition “floating” about in early Christianity, but this is not substantiated.

Eusebius recognizes Papias as an important early historical source but also raises questions about his reliability, especially with regard to his millennial views.