A Visit with Lloyd Sprinkle 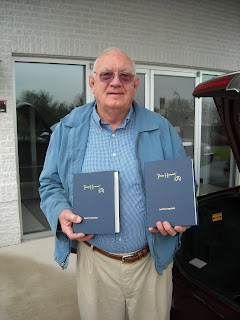 I had the pleasure of driving over to the Valley yesterday and meeting Lloyd Sprinkle in Harrisonburg.  Lloyd's church donated copies of the Baptist version of the Trinity hymnal for CRBC.  Here he is holding a hymn book and an accompaniment book.
Lloyd is Pastor of Providence Baptist Church in Harrisonburg, but he is better known among bibliophiles around the world as the owner of Sprinkle Publications, "publishers of Baptist, Puritan, Reformed, and Historical Literature."
Lloyd grew up in Harrisonburg but moved to Martinsville, Virginia as a teen.  He was coverted there in a Baptist church in Martinsville and under a call to ministry went to Piedmont Bible College.  After graduation he returned to Harrisonburg in 1962 to plant an independent Baptist church.  It was first known as Harrisonburg Baptist Temple.  It later became known as Park View Baptist Church, and in 2004 the name changed again to Providence.  Lloyd started out as a dispensational fundamentalist, but through the influence of a Calvinistic evangelist named Dusty Rhodes he discovered the doctrines of grace.  This completely changed the course of his life and ministry.
Another big change came in the 1970s when Lloyd decided to reprint "The Life and Campaigns of 'Stonewall' Jackson."  He took out a bank loan to print 2000 copies not knowing if he would be able to sell them.  In 13 months he had sold every copy and Sprinkle Publications was born. 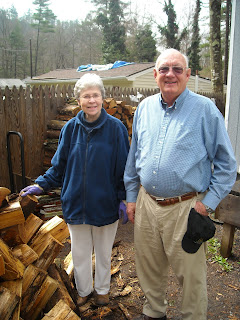 When we got to Lloyd's house in the Rawley Springs neighborhood 10 miles outside of town, we found his wife stacking firewood.  Jackie is also a graduate of Piedmont and has  obviously  been a great help meet to Lloyd.  She plays piano at Providence and teaches music in a local Christian school, as well as helping with the book business, and, yes, stacking wood! 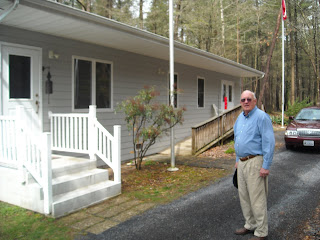 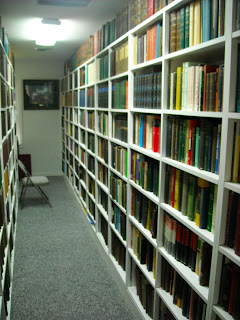 Here's Lloyd outside the building where Sprinkle Publications operates.  Inside, Lloyd also has his own personal library, all neatly ordered in shelves like the ones above.  Wow! 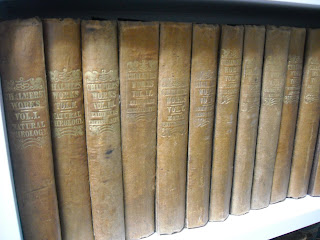 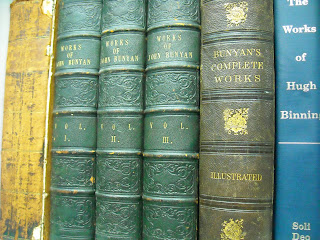 I had some major tenth commandment issues here!  Among the prizes he pulled out were an original 1599 Geneva Bible and and 1634 copy of the Authorized Version (bound with the Book of Common Prayer and the Psalter). 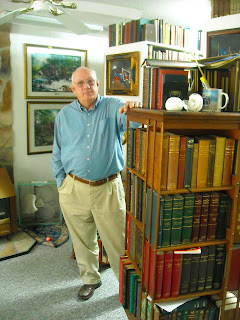 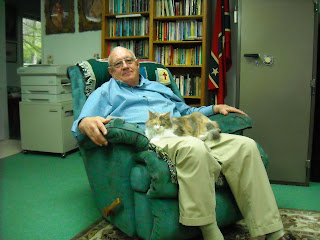 Did I mention there were lots of books?  You might also notice lots of "War Between the States" memorabilia as well.  Here's Lloyd on his recliner in the office with his cat.  I really enjoyed the conversation, fellowship, and hospitality.
JTR
Posted by Jeffrey T. Riddle at 2:23 PM