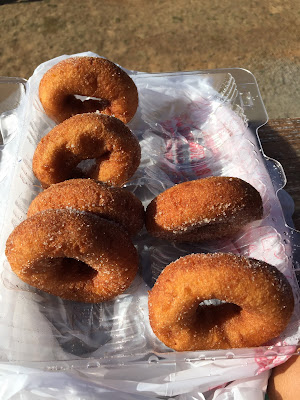 Note: Devotion taken from last Sunday's sermon on John 4:31-38.
But he said to them, I have meat to eat that ye know not of (John 4:32).
What is it that drove the Lord Jesus in his earthly life? What moved him? What motivated him? It was to do the will of the Father who sent him (cf. John 3:16-17).
This is perhaps best epitomized in his prayer in the garden: “Father, if thou be willing, remove this cup from me: nevertheless, not my will, but thine, be done” (Luke 22:42).
What fed, what satisfied the Lord Jesus Christ? Doing the will of the Father. We speak of both the active and the passive obedience of Christ. His will was in perfect sync with the Father’s so that he might fill in all the inadequacies of our imperfect adherence to the Father’s will.
Specific insight into Christ’s doing the will of the Father, as applied to this situation, is revealed in John 6:
John 6:38 For I came down from heaven, not to do mine own will, but the will of him that sent me. 39 And this is the Father’s will which hath sent me, that of all which he hath given me I should lose nothing, but should raise it up again at the last day. 40 And this is the will of him that sent me, that everyone which seeth the Son and believeth on him, may have everlasting life: and I will raise him up at the last day.
The point is that in talking to the Samaritan woman at the well about the living water he had partaken of a more satisfying food: capturing the heart of one of God’s elect!
In light of Christ’s example, consider now what it is that drives you. Is it to do the will of the Father? Is it to be used as part of the means to bring others to Christ whether by preaching (for officers) or by witness and invitation (all God’s people)? Is it the simple satisfaction of living the Christian life? On one hand we need to remember that we are not Christ and can never be like him. On the other hand, we need to recognize that he lived his life as a model for what ours should be. And one day by God’s grace we will be conformed to his image. To what end do you live?
Brethren, we have a food to satisfy us that other men know not of. Let us be driven by this and not by lesser things.


Grace and peace, Pastor Jeff Riddle
Posted by Jeffrey T. Riddle at 7:40 AM