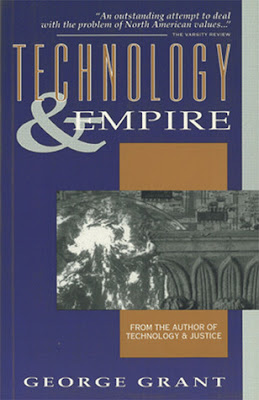 I recently read George Grant’s Technology & Empire (Anansi, 1969). This is George Grant (1918-1988) the Canadian Anglican philosopher, not the contemporary Presbyterian minister of the same name.

Here are some gleanings:

On the influence of the Protestant, Christian tradition in North America and its modern decline:

Calvinism provided the determined and organized men and women who could rule the mastered world. The punishment they inflicted on non-human nature, they had first inflicted on themselves (24).

Now when Calvinism and the pioneering moment have both gone, that primal still shapes us (26).

North American liberalism “is filled with remnential echoes of Calvinism” (26).

If one is raised in the North American dream one so wants one’s society and its institutions to have potentialities for nobility. For example, I had hoped for years that our ecclesiastical organizations (being the guardians of the beauty of the gospel) might continue to be able to permeate this society with something nobler than the barrenness of technical dynamism. I hoped for this when every piece of evidence before me was saying that it was not true. I could not face the fact that we were living at the end of Western Christianity…. (44).

To understand English modernity one must look above all at that unique meeting of Calvinistic Protestantism and the new secular spirit of the Renaissance (65).

[Max Weber] sees with great clarity how Calvinism provided the necessary ethic for capitalism; what he does not understand is that deeper movement of the mind in which Puritans were open to the new physical and moral science in a way the older Christianity was not…. The union of the new secularism and Protestantism brought forth the first great wave of social modernity in England and its empire (66).

Canada’s founders were “that extraordinary concoction, straight Locke with a dash of Anglicanism” (68).

It is a long and complex road from the liberal Protestant believers of Massachusetts to the end of ideology (130).

On the definition of religion:

The origin of the word, of course, is shrouded in uncertainty, but the most likely account is that it arises from the Latin “to bind together”... That is, as that system of belief (whether true or false) which binds together the life of individuals and gives to those lives whatever consistency of purpose they may have. Such use implies that I would describe liberal humanists or Marxists as religious people; indeed that I would say that all persons (in so far as they are rational beings) are religious. It is impossible outside a treatise on the philosophy of religion to justify this broader use of the term as against the more limited one. I can, however, raise on difficulty about the narrower definition which leads to suspicion of its use. Are we not to call Buddhism, or Marxism, religions? Yet neither of these in their purest form make any reference to a “higher” divine power (46).

On modern Christians and the public sphere:

Though it might be a “necessity,” if religious people (Christians) are “forced to retreat from the public square and concern themselves simply with what they consider to be true religion” leaving it to “the advocates of the religion of progress and mastery, to do what they want with it,” the result will be “a sad one.” It will not only imply “an admission of the impotence of human charity, but also a total admission of the barren future of our civilization” (49-50).

On the definition of technology:

By technology I mean “the totality of methods rationally arrived at and having absolute efficiency (for a given stage of development) in every field of human activity” [from J. Ellul, The Technological Society]. The dynamism of technology has gradually become the dominant purpose in western civilization because the most influential men in that civilization have believed for the last centuries that the mastery of chance was the chief means of improving the race (113).

On the “great factories” of academia in the humanities:

In English literature there are many great factories pouring out editions, commentaries, and lives on all but the minuscule figures of our literature…. If one has a steady nerve, it is useful to contemplate how much is written about Beowulf in one year in North America. One can look at the Shakespeare industry with perhaps less a sense of absurdity; but when it comes to figures such as Horace Walpole having their own factory, one must beware of vertigo. The difficulty in the research orientation is that whereas research in the progressive sciences produces discoveries which the public sees as useful, this is not so in the humanities (124).

On meaning and modern art (entertainment):

…. the central role of the humanities will be increasingly seen as handmaiden to the performing arts…. Purpose for the majority will be found in the subsidiary ethos of the fun culture…. One is tempted to state that the North American motto will be “the orgasm at home and napalm abroad,” but in the nervous mobile society, people have only so much capacity for orgasm, and the flickering messages of the performing arts will fill the interstices…. The public purpose of art will not be to lead men to the meaning of things, but to titivate, cajole, and shock them into a world where the question of meaning is not relevant…. (126-127).

When truth in science seems to teach us that we are accidental inhabitants of a negligible planet in the endless public spaces, men are forced to seek meaning in other ways than through the intellect. If truth leads to meaninglessness, then men in their thirst for meaning turn to art (127).