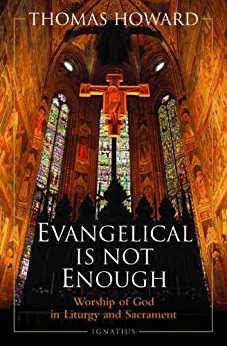 I recently read Thomas Howard’s Evangelical is Not Enough: Worship of God in Liturgy and Sacrament (Ignatius, 1984). Howard is emeritus professor of English at St. John’s Seminary in Brighton, Mass. He was raised in a prominent evangelical family and is brother to evangelical writer Elisabeth Elliot. In his 20s he became an Anglican and at age 50 Roman Catholic. This book was first published in 1984 by Thomas Nelson, a year before Howard swam the Tiber, so much of it is an explanation of his movement to Anglicanism. A postscript describes his transition to Rome.

The center of the book is a critique of the vacuity of much evangelical worship and liturgy.

In Anglican worship, he was impressed by the fact that the vicar “hardly addressed the congregation directly during the act of worship… He did not greet us, and he did not smile at us. No attempt was made to create a feeling of familiarity or welcome” (45).

The experience “did not depend in the smallest degree on atmosphere nor on the minister’s establishing any sort of contact with the congregation. The notion of group dynamics would have seemed grotesque, irrelevant, and embarrassing” (46).

He reacts against the evangelical tendency to focus on the personality of the minister. According to Howard, “the less individuality we have to cope with in the minister, the better” (60).

Howard observes that the “extempore prayers” of evangelicals are “made up of stock phrases strung together,” suggesting that “spontaneity is impossible sooner or later” (48). He adds that as an evangelical he had “little appreciation for the whole Church as a praying body, with its own prayers suitable for perpetual use” (49).

He later adds: “But I have wondered whether in its stress on earnestness, and even fervor, evangelicalism has not to some extent overestimated most of us” (76).

In contrast, Howard notes the appeal of ritual:

That ritual might actually be a relief, and even a release, is almost incomprehensible to [evangelicals]. That the extempore and impromptu are eventually shallow, enervating, and exhausting seems a contradiction to these people, who so earnestly believe that nothing does not spring from the authenticity of the moment is actually fruitful (96).

He concludes, “Evangelicalism, stalwart as it is, had in effect left me with nothing but the Bible and the modern world” (58).

There is much in Howard’s critique with which I resonate and which we would do well to hear and ponder. I too have come to find much that passes as evangelical worship to be superficial, vacuous, and sometimes even outright silly.

Yes, evangelical ministers or “worship leaders” sometimes try to act as “hale fellows well met,” liturgical masters of ceremony, more intent on massaging the egos of the “audience” than leading them before a holy God.

There are, however, also some problems with Howard’s critique. God’s people are his ekklesia. They are his “called out” ones. And one aspect of corporate worship is the assembling of God’s people (cf. Heb 10:25).

Yes, there are problems with much superficiality in evangelical worship, but, from what I have observed, superficiality might also seep into so-called “liturgical” worship. This is why many young persons who comes from such traditions are often attracted to what they find to be more personal, welcoming, and authentic in evangelicalism (even if, later on down the road, they tire of its weaknesses and drift away).

Within the general critique of evangelical worship, Howard also strikes out at what he perceives to be the weaknesses of Reformed worship.

He finds Reformed worship to be too austere, too cerebral: “It is Buddhism and Platonism and Manichaenism that tells us to disavow our flesh and expunge everything but thoughts” (37).

The “sparse and intellectual approach,” according to Howard, “treats us as though we were disembodied intellects” (102).

He disavows a religion that says to us, “No. Sit still. Or stand and sing…. But your main job is to think about the event and hear a sermon about it. Don’t do anything” (146).

At one point, Howard draws an analogy to a birthday party, noting that on such occasions we make much of ceremony (candles, cake, dimmed lights, etc.), asking why we would expect less in worship (see 102). The problem with this analogy is that a birthday party is not worship. It is not something the Lord has commanded.

This is a general problem with Howard’s approach. Though many of his critiques of broad evangelical worship are on target, his understanding of the Regulative Principle is less precise. Perhaps this is because Howard was more exposed to broad evangelicalism, even a Calvinistic tinted version of it, but not Reformed confessionalism.

Christianity and its worship is about the renewal of the mind (Rom 12:2), and it is about hearing the Word (cf. Rom 10:14, 17). Hearing is doing! He accuses Protestant worship of being like Buddhism, but does not note that the RC liturgical tradition might just as well be compared to the sensuality of Hinduism!

Along these lines, we might note that Howard is also less secure in attempting to marshal Biblical arguments to support his shift in views. For example, in an effort to support the idea of prayers for the dead and post-mortem spirituality, he claims the Bible is largely silent, neglecting obviously relevant passages like the Rich Man and Lazarus in Luke 16, among others.

In the end, though, I find Howard’s critique of evangelical worship to be at times painfully accurate. I do not agree with him that the answer is to embrace Rome. It is a shame that Howard did not dig deeper into his Protestant, Biblical heritage, before making this move.

He raises an alarm, however, that we should heed. Evangelicalism, for many, holds an initial appeal that often dissipates over time due to lack of depth. It is like a sweet dessert that gives a quick sugary high but ends up with a crash, emptiness, and hunger. Some leave it for nominalism or nothingness. Others, like Howard, drift to the liturgical churches, whether Anglicanism, Orthodoxy, or RC, looking for something with more heft.

Howard senses this unease: “Nonetheless, something is causing thousands of stoutly loyal evangelical men and women to inquire into matters of the greatest antiquity and gravity” (149).

The challenge for confessional ministers is to embrace, teach, and embody a rich and soul-satisfying experience of Protestant, confessional worship, regulated by Scripture.
Howard also raises another grave matter: ecclesiology. He jibes that Pentecost was not “the birthday merely of a clutter of conventicles, all jostling and jockeying and clamoring with a multitude of voices but no real authority or unity” (150).

In his postscript (composed after his embrace of Rome), Howard writes: “the question, What is the Church? becomes, finally, intractable….” (157). He concludes: “Yes—I believe that the Roman Catholic Church is the Ancient Church. I accept its claims” (158). We, as Protestants, must be able, charitably, to explain the ways in which Rome does not reflect the ancient church, as evidenced in how it is presented in Scripture and point out that it does not, in fact, provide the authentic unity which only Christ may give (see John 17:20-22).

So, we must strive for a coherent and winsome theology and practice of worship but also of the church. Evangelical is, indeed, not enough, But neither is Rome.

I recently came upon the writings of Thomas Howard when reading Elisabeth Elliot's "Trusting God in a Twisted World". I considered purchasing a couple of his books and came upon "Evangelical is Not Enough". I appreciate your critique, and have found it to be the only really helpful thing our there. It has been difficult for me to read about Elisabeth's admission that perhaps she too would have converted had she had enough courage. I do not know how reliable this report is, do you?

Hi Ann, thanks for the feedback. I had not heard of EE's comment that she too would have converted had she had the courage. I'm guessing she might have been referring to a move to Canterbury (Anglicanism) rather than Rome, but maybe not. Do you have a citation for that anecdote?