Calvin on Papists, Mahometans, and the Sufficiency of Scripture 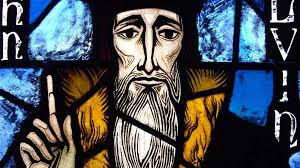 I’ve been reading Calvin’s commentary on John as I preach expositionally through the Fourth Gospel. In those sermons I only get to refer to a fraction of the Geneva master’s insights. One overlooked comment from recent sermons on John 4 was Calvin’s contrast of the woman at the well’s simple trust in Christ (turning from the corruption of Samaritan religion) with that of “Papists” and “Mahometans” in his remarks on John 4:25:

I wish that those who now boast of being the pillars of the Christian Church, would at least imitate this poor woman, so as to be satisfied by the simple doctrine of Christ, rather than claim I know not what power of superintendence for putting forth their inventions. For whence was the religion of the Pope and Mahomet collected but from the wicked additions, by which they imagined that they brought the doctrine of the Gospel to a state of perfection? As if it would have been incomplete without such fooleries. But whoever shall be well taught in the school of Christ will ask no other instructors, and indeed will not receive them.

….There is, therefore, no danger that he will disappoint one of those whom he finds ready to become his disciples. But they who refuse to submit to him, as we see done by many haughty and irreligious men, or who hope to find elsewhere a wisdom more perfect—as the Mahometans and Papists do—deserve to be driven about by innumerable enchantments, and at length to be plunged in an abyss of errors….

Notice that Calvin sees the problem with both groups to be their tendency to make “wicked additions” to Scripture in order to bring it to “perfection.” For Calvin, the Scriptures are sufficient and complete as they are.