Melito of Sardis on the OT Canon 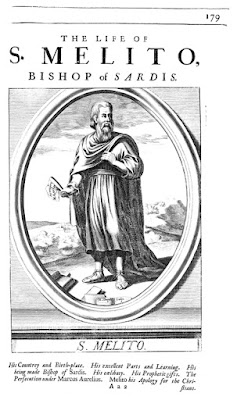 Note:  I preached a sermon on the Canon of Scripture last Sunday afternoon in the 1689 confession series.  As I told a friend today, I’ve had “canon on the brain” this week.  Here are some notes on Melito of Sardis’ definition of the Christian OT canon:

Melito of Sardis (d. c. AD 190) was an influential early Church Father. In his Ecclesiastical History, Eusebius cites Polycrates of Ephesus’ description of Melito as “the eunuch, who lived entirely in the Holy Spirit, who lies in Sardis, waiting for the visitation from heaven when he will rise from the dead” (E. H., V.xxiv). Eusebius also offers his own sketch of Melito, including a catalogue of his writings (see IV.xxvi).

Here he cites Melito’s letter to a man named Onesimus in which he discusses the Old Testament books accepted by Christians, with regard to his six volume work called the Extracts (Eklogai). Here are the OT books as he lists them in this letter:

The Psalms of David,

The Proverbs of Solomon and his Wisdom, Ecclesiastes, the Song of Songs, Job,

The prophets Isaiah, Jeremiah, the twelve in a single book,

1.  The book of Esther is not mentioned.

2.  The book of Lamentations is not mentioned, but it is likely included with Jeremiah.

3.  The book of Nehemiah is not mentioned, but it might have been included with Ezra.
4.  The ordering shows the influence of the LXX. For example:  Ruth is listed with the historical works and Chronicles is listed with Kingdoms rather than at the end with a grouping of “the writings” in the tri-partite Hebrew Bible ordering.

5.  The listing is distinctive, however, in that it does not include the apocryphal books.  The one exception could be the Wisdom of Solomon, but it might be that the phrase “The Proverbs of Solomon and his Wisdom” simply refers to the book of Proverbs.

1. This list shows that the early Christians accepted the OT as part of the Christian Scriptures, contra Marcion.

2. Melito’s OT canon excluded the apocryphal works of the LXX, showing that at least some early Christians rejected these works as canonical and, instead, received the same books as those of the Hebrew Bible.

3. Melito’s OT canon also gives evidence that there was still some apparent controversy about which books were canonical, especially with regard to the book of Esther.