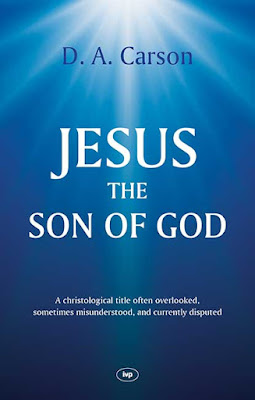 This book is based on three lectures delivered by Carson at several Reformed schools.  It is a brief study of the title “Son of God” in the New Testament as attributed to Jesus of Nazareth.  It also addresses contemporary issues related to the rendering of this term in translations of the Bible aimed at a Muslim audience.

The book consists of three chapters:

Chapter one explores “Son of God” as a Christological title (pp. 13-42).   It begins by surveying son and sonship language in the Bible including various more mundane, non-Christological references, like “sons of oil” in Zechariah 4:14 to refer to “anointed ones.”  It also surveys places where “son of God” is used as a term to refer to angels or human beings other than Jesus.  Finally, it surveys “Son of God” as a title for Jesus.

Chapter two provides a more extended exegetical study of two key passages:  Hebrews 1 and John 5:16-30 (pp. 43-72).  With regard to Hebrews 1, Carson sees the Son of God themes as tying together “complementary christologies” (e.g., Davidic and priestly) “into one organic whole” (p. 62). With regard to John 5:16-30, Carson notes that the Son of God language does not imply “ditheism” or that Jesus as Son of God constitutes “a second God-center” (pp. 65-66).

He first asks how study of the Son of God title should impact the way Christians think about Jesus.  Of interest here is Carson’s assertion that systematic theologians should give more attention to Biblical exegesis of the Son of God title passages, particularly with regard to their understanding and articulation of the doctrine of the Trinity (pp. 76-80) and the doctrine of “the eternal generation of the Son” (pp. 80-86).  He adds that a better grasp of this title will also edify the church in it evangelism and worship (pp. 85-86).

Second, he discusses the implications of this study on current debates of Bible translation in the Muslim context. Some translators have suggested that Biblical terms like “Son of God” might be better rendered simply as “Messiah” or “Father” as “Guardian” in order to avoid confusion or offense to Muslim readers who might who might wrongly confuse the title with the idea of natural generation (i.e., It might wrongly lead readers to believe that Christians hold Jesus to be the physical offspring of God the Father).  Connected to this question is also the contemporary missiological debate as to whether there can be Christian converts in the Muslim context who remain within the mosque.  Carson concludes that the original Biblical terms and titles, like Son of God, should not be discarded for supposedly pragmatic reasons.  He also suggests that some of these problems have arisen because those who work in Bible translation sometimes do not have adequate training in Biblical exegesis and systematic theology.

Carson writes cleanly and clearly, yet I find his prose (in this and other works) to be generally vanilla.  I especially appreciate and agree with his final comments rejecting “dynamic” approaches to translating the Biblical title “Son of God” in the name of missiological relevance.  I profited from his survey of the sonship language in the Bible, but I’m not sure I got from this book what I was looking for:  A solid and satisfying Biblical and theological exposition and interpretation of the title Son of God.  Carson chides systematicians for neglecting exegesis, but they might well shoot back that exegesis without a clear confessional framework can also fall short.


What an intellectually proud review, from a mere suburban pastor, of a publication by a major academic. In a very short book, how could Carson possibly have provided the extensive exegesis you desired. He writes "vanilla" prose? This book was a recast of oral deliveries. Ridiculous to have expected tightly argued theological "speak". As for Carson's other books, his "big" books, his writing is not remotely "vanilla".

Anon, thanks for your comment. Sorry you found it a "proud review." In fact, it may even be worse than you suppose. I pastor a quite small church in a rural setting! So, I do not even rise to the status of being a "suburban pastor"!

In all seriousness, I read the book because I was interested in the topic and was glad to say some positive things about it, but, as the review notes, I just was not that enthralled with either the argumentation or confessional stance. I respectfully stand by that assessment but understand that not everyone will agree with it.

If you've read the book and have written a review, please share it with me so that I can learn from your insights.