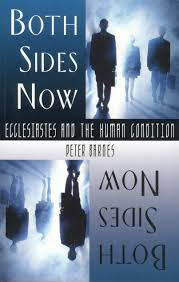 Note:  A pastor friend who stayed the night at our house last month gave me this book as hospitality gift.  I took it as a kind providence, since he did not know I was considering preaching through Ecclesiastes. I read the book last week and thought I’d offer a brief note on it.

Barnes is a Presbyterian pastor in Sydney, Australia.  I’ve enjoyed reading a couple of other Banner works by Barnes, including his booklet on abortion “Open Your Mouth for the Dumb” and the short books, The Milk of the Word:  An Introduction to the Christian Faith (1985), and  A Handful of Pebbles:  Theological Liberalism and the Church (2008). He has also written John Calvin:  Man of God’s Word, Written and Preached (2011), but I have not yet read that one.

Both Sides Now is not a commentary on the book of Ecclesiastes.  It does not provide a chapter by chapter or verse by verse exposition of the text.  Rather, it is a collection of devotional thoughts and reflections on various themes drawn from the Old Testament wisdom book.

The more we are gratified, the less we are satisfied (p. 13).

Before we confront the issue of life after death, we need to ask whether there is life before death (p. 94).

We cannot know everything, but we can know life in Christ (p. 104).

The book is also filled with various anecdotes, quotations, and biographical snippets.  Barnes draws not just from theologians and Christian circles but also from pop culture.  So, we not only read quotes from Augustine, Pascal, and Kierkegaard but we also learn about the tragic death of Eric Clapton’s three year old child inspiring the song “Tears in Heaven” and the last words of Frank Sinatra (not “I did it my way” but “I am losing”) (see pp. 83, 87). The book’s title is taken from a line in a Joni Mitchell song, “I’ve looked at life from both sides now” (cited at the beginning and end of the work, see pp. 1, 103-104).  Certainly the varied references show the breadth of the author’s reading.  If anything might be said in criticism, the book sometimes seems to lose its focus in the heaping up of these anecdotes.  Still, the preacher in search of a fitting illustration might well find it a treasure trove.

The “both sides now” of the title is the realization of a repeated theme in Ecclesiastes that human beings have both eternity and madness in their hearts.  Barnes effectively points the reader to Christ as the solution to this inner conflict.

I commend it as a devotional work and a homiletical resource.  It is brief, easy to read and understand, and could readily be digested in a day or two.  The preacher who takes Ecclesiastes as his subject will find it a helpful work to supplement his study of exegetical commentaries.

Just one more criticism:  Bible citations are from the ESV. I would have preferred a translation based on the traditional text.  I won’t hold that, however, against it.

This looks right up my alley--I'll have to check it out.

I think you'd enjoy it Ethan.