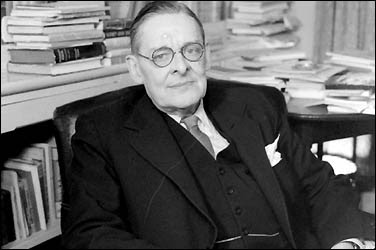 I just posted an audio reading of T. S. Eliot's review of the New English Bible NT which appeared in the Sunday Telegraph on December 16, 1962 (p. 7).  Listen to it here.  Read it here.

Thomas Stearns (T. S.) Eliot (1888-1965) was an essayist, poet, play-write, publisher, and literary critic, perhaps best known for his poems like The Waste Land (1922). Though born in the US he became a naturalized British citizen in 1927.  He won the Nobel Prize in Literature in 1948.  Eliot also converted to Anglicanism from Unitarianism in 1927.  Whatever his spiritual beliefs might have been, Eliot was an admirer of the Authorized Version (King James Version) for its religious, liturgical, and, especially, literary merits.

In this essay he bemoans the fact that the NEB does not even rise to the level of "dignified mediocrity."  In general he questions whether the English language has undergone such drastic changes as advocates for modern translations assume and argues that some changes might just be for the worse, noting, "it is as much our business to attempt to arrest deterioration and combat corruption of our language, as to accept it."  To use the NEB liturgically, he suggests, will only make it "an active agent of decadence."