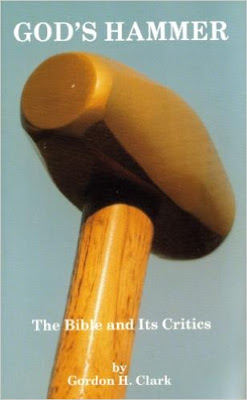 Note:  I've had this book on my shelf for a while.  I finally picked it up and read it last week, as I'm continuing to preach through chapter one in the Baptist Confession.

This book is a collection of various essays and papers on the doctrine of Scripture from the Reformed Presbyterian philosopher Gordon H. Clark (1902-1985).

The essays are largely written against the backdrop of the mid to late twentieth century “battle for the Bible.” The forward is by Harold Lindsell.  There are various jabs at and warnings against liberal and Neo-Orthodox views on Biblical inspiration (see especially, “The Concept of Biblical Authority,” pp. 127-155).  Several of the essays also reflect Clark’s conflict with Reformed theologian Cornelius Van Til and his disciples (see especially “The Bible as Truth,” pp. 24-38).  For Clark the truth of Scripture is propositional, comprehensible, and logical.  [Aside:  For a podcast offering a Van Tilian reflection on this controversy, listen to this episode of the Reformed Forum.  For a Clarkian perspective on this controversy see this article and this one].

The essays also provide some interesting insights into Clark’s hopes for the Evangelical Theological Society, of which he was a founding member, and his vision of it as a bulwark against liberalism (see especially “The Evangelical Theological Society Tomorrow,” pp. 51-63).  One wonders how Clark would assess the contemporary construal of inerrancy within evangelical academic circles and the state of that society today.

The closing article is titled, “The Reformed Faith and the Westminster Confession” (pp. 186-198).  In it Clark calls the first chapter of the confession on Scripture “a continental divide,” “the great divide between two types of religion” (p. 187).  On one side, with the denial of Biblical authority, is “naturalism, secularism, or humanism” (p. 187).  On the other is faithful, Biblical Christianity.  Even here, however, the waters divide into two streams that generally seem to flow in the same direction. The weaker of the two may accept Biblical infallibility and be “broadly evangelical” even though it rejects other details of the confession.  Sadly, it often flows through “stony ground” and oozes “through swamps” (p. 196).  The superior of the two is that of confessional Christianity which is “identified with the doctrines of the great Reformers” (p. 196).

He closes by noting three convictions he believes are reflected in the Westminster Confession:

First, our forefathers were convinced, the Westminster Confession asserts, and the Bible teaches that God has given us a written revelation.  This revelation is truth…..

Second, our forefathers were convinced and the Reformed Faith asserts that this truth can be known.  God has created us in his image with the intellectual and logical powers of understanding.  He has addressed to men an intelligible revelation and he expects us to read it, to grasp its meaning, and to believe it.  God is not totally other, nor is logic a human invention that distorts God’s statements…..

Third, the Reformers believed that God’s revelation can be formulated accurately.  They were not enamored of ambiguity; they did not identify piety with a confused mind.  They wanted to proclaim truth with the greatest possible clarity.  And so ought we (p. 197).

This summary also, of course, conveniently encapsulates some of Clark’s own distinctive theological convictions.