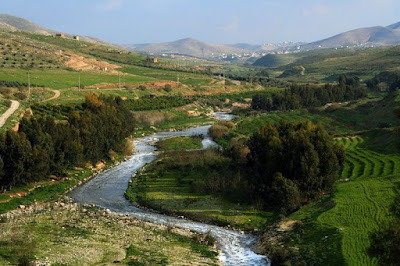 Image:  Modern view of Manahaim ("two camps") where David's forces fought with those of Absalom

Note:  Here are the notes for the final application from last Sunday’s message drawn from David’s cry of despair in 2 Samuel 18:33 after news reaches him of the death of his son Absalom.

Finally, we want to come to that last verse in this chapter and to that exasperated cry of David, which includes these words:  “would God I had died for thee” (v. 33).

Take that along with v. 3 where the people acclaim David as a valued representative man worth more than a thousand ordinary men and you have a premonition of something greater.  This desire for one man to stand in the place of the beloved can be traced throughout Scripture.

Compare Moses’ intercession for the people after their golden calf apostasy:

Exodus 32:32 Yet now, if thou wilt forgive their sin--; and if not, blot me, I pray thee, out of thy book which thou hast written.

Or think of Paul’s reflections on recalcitrant Israel as so many rejected the gospel:

Romans 9:1 I say the truth in Christ, I lie not, my conscience also bearing me witness in the Holy Ghost, 2 That I have great heaviness and continual sorrow in my heart. 3 For I could wish that myself were accursed from Christ for my brethren, my kinsmen according to the flesh:

Think also of the words of Caiphas the high priest who unwittingly prophesied of Christ:

John 11:50 Nor consider that it is expedient for us, that one man should die for the people, and that the whole nation perish not.

Romans 5:6 For when we were yet without strength, in due time Christ died for the ungodly. 7 For scarcely for a righteous man will one die: yet peradventure for a good man some would even dare to die. 8 But God commendeth his love toward us, in that, while we were yet sinners, Christ died for us.

Thanks be to God, Pastor Jeff Riddle
Posted by Jeffrey T. Riddle at 11:22 PM