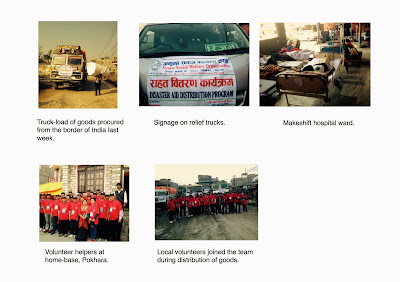 Note:  Another update on relief efforts in Nepal from Pastor Poh in Malaysia:

Pastor Samuel Rai has rented 4 trucks - three to carry goods and one to carry about 20 people to distribute goods to the earthquake victims. At his base in Pokhara, a total of 60 volunteers are helping with the packaging of the things. As they travel, locals are recruited to help in the distribution of goods. That number of helpers is needed not only to handle the goods, but also to protect the goods from being looted. In some places, the desperate survivors of the earthquake resort to snatching the goods.

Samuel Rai is currently in Dhading, epicentre of the first earthquake of 25 April, 2015. He will be there for four days, travelling from village to village to distribute goods - including tents, food, water filters, and basic medicine such as anti-diarrhea tablets. Each family is given the equivalent of US$40 to buy food. He tries to work in co-operation with the local authorities. At some places in the journey, the roads had to be cleared or filled in. At another place, the villagers had to walk 2 hours to come to them. There are 1310 families in the Dhading area, of which 672 families have been helped as of today.

Last week, they helped at another village of 200 families. Some of Samuel’s helpers are still there, digging into the collapsed houses, searching for bodies, and burying those that are found. They also provided blankets and bedding for the injured in a makeshift shelter in the porch of an an office building.

News has reached Samuel Rai that that the local Buddhists of an affected village near the border of Tibet are denying government aid to the Christians since the latter can easily get aid from abroad. Samuel Rai hopes to visit that village soon to distribute aid to all, regardless of whether they are Christians or not.

After returning to Pokhara for the weekend to rest, worship, and reload the trucks, a team will be going to Gorkha next week. Another team will be sent to Dolkha district, the epicentre of the second earthquake of 12 May, 2015. According to the news, the death toll from the second earthquake has risen to 110 persons, with 1,926 injured. Another trip to the border of India is planned to obtain more supplies, including 2,000 to 3,000 tents.

While our brethren labour in that stricken land of Nepal, let us pray and contribute funds as we are able.

You can contribute here through Malaysian Reformed Baptists.