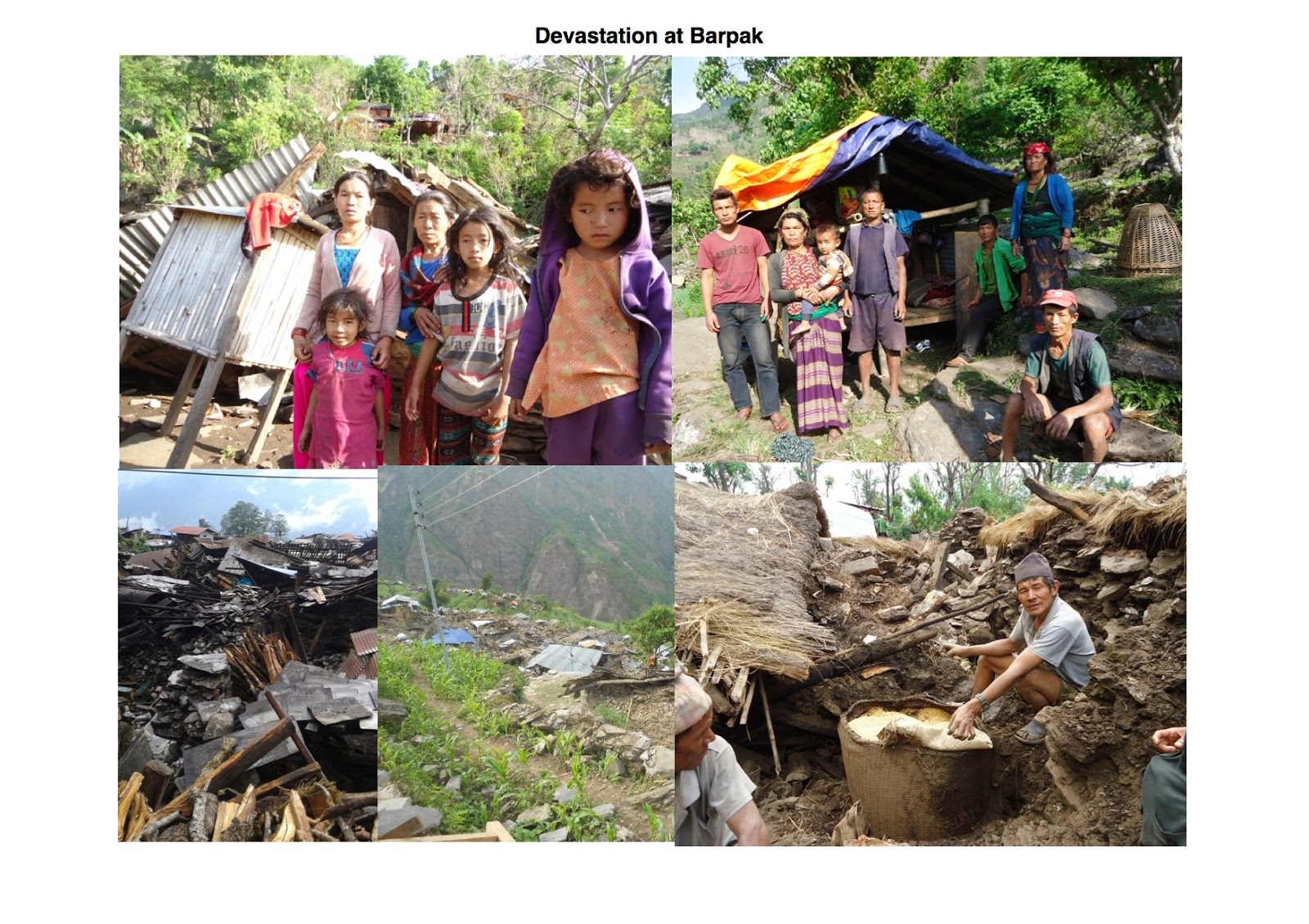 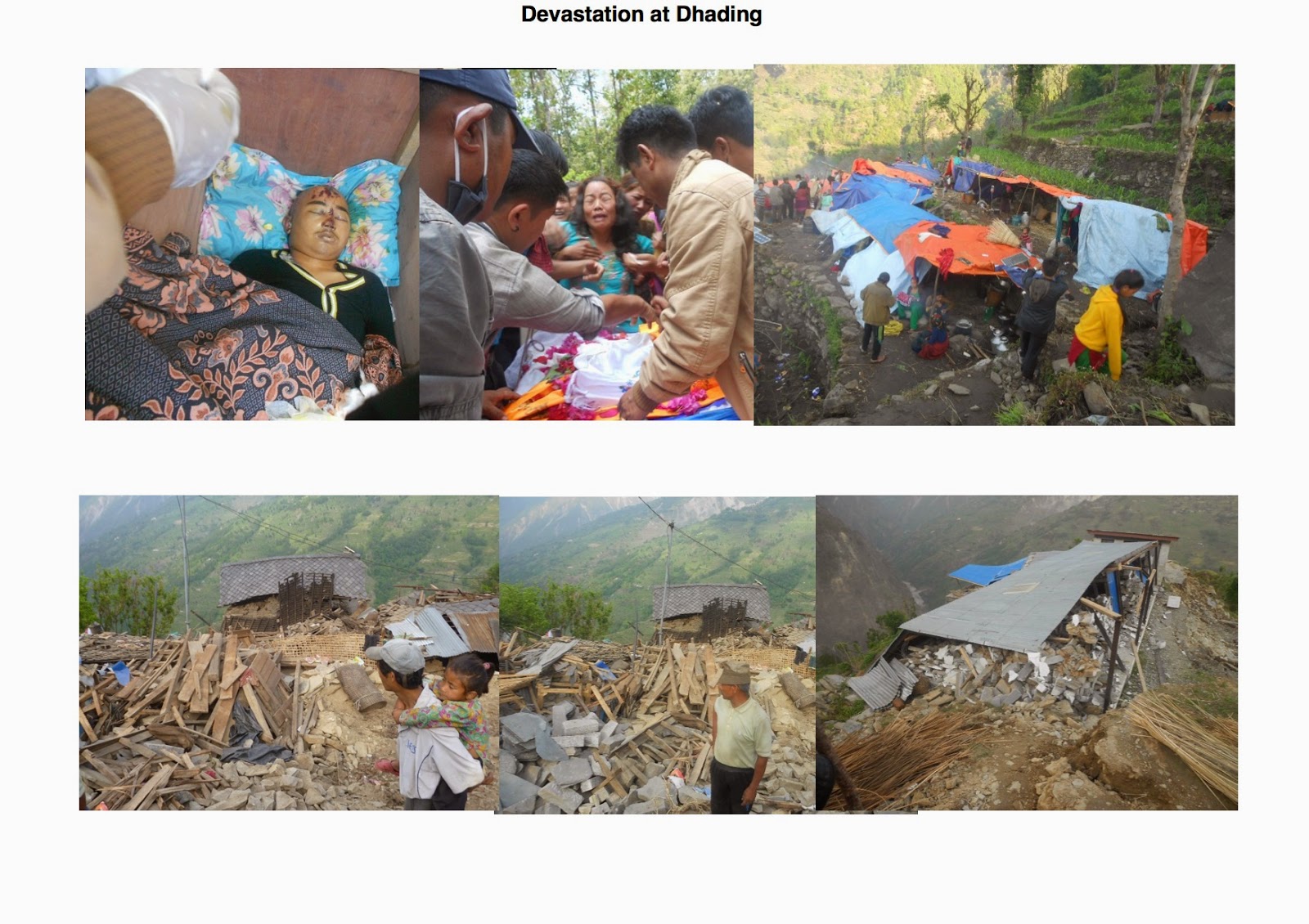 Note:  Here is another update (along with the images above) on the relief work of Pastor Samuel Rai in Nepal, which was sent out by Pastor Boon Sing Poh of Malaysia:

Two teams were sent out on 27 April to assess the damage in the villages in western Nepal. One went to Dhading, the other to Gorkha, located close to the epicentre of the earthquake which struck on 25 April 2015.

Barpak at Gorkha
The team that went to the Gorkha district included Pr Chhetra Baramu, Deacon Yanja Lama, and Pr Tul Man Gurung. Of the 1600 houses there, 1400 have been destroyed. The way up to the village is dangerous as there have been landslides, causing huge parts of the hills to collapse. The way is blocked, the forest destroyed, and even the wildlife is affected. Barpak lies between two rivers. The electric powerhouse is damaged, cutting off electricity supply to the village. Seventy people are confirmed dead, while hundreds are injured. The people are still searching in the ruins for dead bodies, amidst the constant tremors a week after the earthquake.


In Mandre Dhunga, located at the centre of Barpak, 3 believers died - one a Sunday School teacher, the others children. In the village of Cotgaun, nothing remains except for ruins. The earth is cracked open in many places, preventing the surviving people from going to other villages. It is difficult to extend aid to them as well. The earthquake has not abated, with tremors occurring very two hours. On 2 May, 30 people died as a result of landslide.

Ree VDC at Dhading
Two of our pastors was despatched to this predominantly Christian village. They learned that 80 people died, while 666 were injured. Of the dead, 77 were Christians. The devastation included: 1200 houses, 28 of the 29 churches, 5 schools, 2 high schools, and 2 health posts (clinics). The injured have not been receiving proper treatment, while the people all stay in tents.


In the village of Tawal, 140 houses belonging to Christians were destroyed. The dead include 17 Christians, two of whom were children. Similar devastation occurred in villages nearby, including Richet. The villages most affected have not been reached by rescue teams - including Tipling, Lawa, Sertung and Jharlang. The roads in the Dhading district are mostly damaged by heavy rain or blocked by the landslides, thus hindering relief effort.

The monsoon season is starting, with heavy rain already pouring down, making the situation worse. The stench of rotting dead bodies is strong because of the combined effects of the sun and the rain. The survivors find it difficult to sleep out at night when it rains. There is the fear that an epidemic of diseases might be triggered off by the presence of dead bodies, the carcasses of hundreds of cattle, and the poor sanitation. A family of 10 members have to sleep under one tent and are forced by the circumstances to eat whatever edible things they can find.

We are planning to supply as many tents as we able. The priority things needed are medicine and sanitary items, followed by food and blankets. We are in the process of packaging the items. Soon, we will be dispatching three teams to deliver the supplies. We are also planning for long-term relief, including rebuilding the church buildings, the Bible School in Richet, the water supply for the villages, and setting up clinics.

You can donate to help Pastor Rai in his relief work here.
Posted by Jeffrey T. Riddle at 1:58 PM