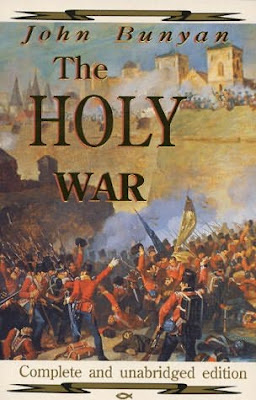 Over Thanksgiving, I was reading John Bunyan’s “other” allegory, The Holy War (first published 1682). I was struck by the scene in which Emmanuel establishes a ministry among the citizens of Mansoul. Over this task he appoints two persons. The first is “the Lord Chief Secretary” (the Holy Spirit) and the second is “the old gentleman, who before had been the recorder of Mansoul, Mr. Conscience by name.” Here is Bunyan’s descrition of the proper role of the Lord High Secretary in Mansoul:
When this was over, the Prince sent again for the elders of the town of Mansoul, and communed with them about a ministry that he intended to establish among them; such a ministry that might open unto them, and that might instruct them in the things that did concern their present and future state.
'For,' said he, 'you, of yourselves, unless you have teachers and guides, will not be able to know, and, if not to know, to be sure not to do the will of my Father.'
At this news, when the elders of Mansoul brought it to the people, the whole town came running together, (for it pleased them well, as whatever the Prince now did pleased the people,) and all with one consent implored his Majesty that he would forthwith establish such a ministry among them as might teach them both law and judgment, statute and commandment; that they might be documented in all good and wholesome things. So he told them that he would grant them their requests, and would establish two among them; one that was of his Father's court, and one that was a native of Mansoul.
'He that is from the court,' said he, 'is a person of no less quality and dignity than my Father and I; and he is the Lord Chief Secretary of my Father's house: for he is, and always has been, the chief dictator of all my Father's laws, a person altogether well skilled in all mysteries, and knowledge of mysteries, as is my Father, or as myself is. Indeed he is one with us in nature, and also as to loving of, and being faithful to, and in the eternal concerns of the town of Mansoul.
'And this is he,' said the Prince, 'that must be your chief teacher; for it is he, and he only, that can teach you clearly in all high and supernatural things. He, and he only, it is that knows the ways and methods of my Father at court, nor can any like him show how the heart of my Father is at all times, in all things, upon all occasions, towards Mansoul; for as no man knows the things of a man but that spirit of a man which is in him, so the things of my Father knows no man but this his high and mighty Secretary. Nor can any, as he, tell Mansoul how and what they shall do to keep themselves in the love of my Father. He also it is that can bring lost things to your remembrance, and that can tell you things to come. This teacher, therefore, must of necessity have the pre-eminence, both in your affections and judgment, before your other teacher; his personal dignity, the excellency of his teaching, also the great dexterity that he hath to help you to make and draw up petitions to my Father for your help, and to his pleasing, must lay obligations upon you to love him, fear him, and to take heed that you grieve him not.
'This person can put life and vigour into all he says; yea, and can also put it into your heart. This person can make seers of you, and can make you tell what shall be hereafter. By this person you must frame all your petitions to my Father and me; and without his advice and counsel first obtained, let nothing enter into the town or castle of Mansoul, for that may disgust and grieve this noble person.
'Take heed, I say, that you do not grieve this minister; for if you do, he may fight against you; and should he once be moved by you to set himself against you in battle array, that will distress you more than if twelve legions should from my Father's court be sent to make war upon you.
'But, as I said, if you shall hearken unto him, and shall love him; if you shall devote yourselves to his teaching, and shall seek to have converse, and to maintain communion with him, you shall find him ten times better than is the whole world to any; yea, he will shed abroad the love of my Father in your hearts, and Mansoul will be the wisest, and most blessed of all people.'
JTR
Posted by Jeffrey T. Riddle at 10:30 AM