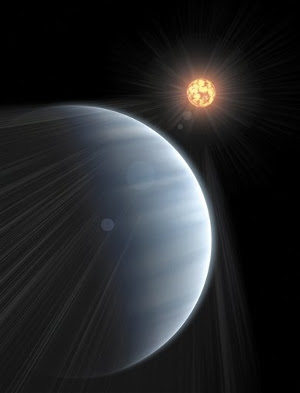 The Associated Press published an online article this week which reported that scientists have discovered that there are billions more stars in the universe than previously believed to exist. The article reports:
A new study suggests there are a mind-blowing 300 sextillion of them, or three times as many as scientists previously calculated. That is a 3 followed by 23 zeros. Or 3 trillion times 100 billion.
The estimate, contained in a study published online Wednesday [12.1.10] in the journal Nature, is based on findings that there are many more red dwarf stars — the most common star in the universe — than once thought.
The recalculation came after astronomers discovered that elliptical shaped galaxies held far more red dwarf stars than previously realized. Former calculations were based on estimates made from study of our own spiral shaped galaxy, the Milky Way, and were extrapolated to the study of other galaxies. Scientists estimate that there are 100 billion to a trillion galaxies in the universe and that each galaxy holds about 100 billion to a trillion stars. They now say that about a third of the galaxies are elliptical rather than spiral.
What do we learn from this? For one thing, we learn that all “scientific” knowledge is tentative. What one generation holds as indisputable scientific truth can be changed in the next. More importantly, we learn that this cosmos is bigger than we knew. From a theological perspective, we should be even more in awe of our Creator.
David’s words in Psalm 8 hold even more weight than we previously realized:
3 When I consider thy heavens, the work of thy fingers, the moon and the stars, which thou hast ordained;
4 What is man, that thou art mindful of him? and the son of man, that thou visitest him?
Thus, we are driven to even greater amazement and admiration at the Incarnation that “the Word was made flesh and dwelt among us” (John 14:6).
Grace and peace, Pastor Jeff Riddle
Posted by Jeffrey T. Riddle at 8:45 PM

That is just what we end up saying..in wonder...when we read and hear about these new discoveries: 'What is man?'. And yet, He was mindful of us. In all of His amazing creation, He planned redemption only for us. He sent His Son only for us.
The 'stars numbers' are so mind-boggling. I always used to wonder that God had said to Abraham that his seed would be like the sand on the seashore and like the stars in number. I used to think, 'there's no way the stars are anything like the grains of sand in number, surely.' I guess - like in so many other ways - my finite mind is waaaay off the mark when it comes to the wonder of an infinite God.
Thanks for posting, and for taking my mind, once again, to our infinitely great God.