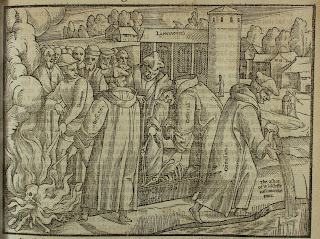 Image:  Burning Wycliff'e's bones. From Foxe's Book of Martyrs.
I was struck recently by a biographical note on the proto-Protestant John Wycliffe (1324-1384). Wycliffe, an Oxford theologian, was one of the first to translate the Bible into the English language which ran him afoul of the Roman Catholic authorities. He is called the “Morningstar of the Reformation.” Despite strong opposition from Catholic leaders, Wycliffe’s teachings were never officially denounced by church authorities during his lifetime, and he died peacefully on December 31, 1384.
The interesting thing is what happened decades after his departure. When John Hus pressed some of the ideas of Wycliffe even further, the Council of Constance (1415) not only condemned Hus to be burned at the stake but also ordered that Wycliffe be punished posthumously. His books were ordered to be burned; his body was exhumed from the consecrated ground where it had been buried; his remained were burned, and the ashes were scattered on the River Swift.
It is amazing what vindictive and insecure religious authorities will do to defend themselves from the truth. They will even burn Wycliffe’s bones.
JTR
Posted by Jeffrey T. Riddle at 1:03 PM

What was the significance of burning the bones? What did it accomplish in the minds of the clergy and the common people? I heard once of a superstition or teaching that only those buried (perhaps a misapplied reference to John 5:28,29,) would be resurrected and that only those with a complete body would enter heaven, again another misapplication of scripture, (lev21:18) but I can't find a reference work to support that....