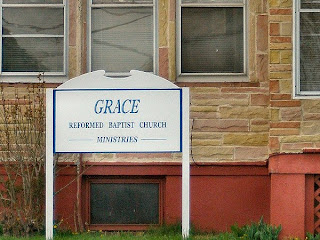 Note:  The Vision is the weekly e-newsletter of Christ Reformed Baptist Church.  The article below is from the "Pastoral Reflections" column.  To subscribe to the full version of The Vision, email your request to info.crbc@gmail.com.
Note: The following article was written by Dr. Robert Spinney while he was an Elder at Grace Baptist Church of Hartsville, Tennessee. He is now on the faculty of Patrick Henry College in Purcellville, Virginia.
A Reformed Baptist church is a Bible-centered, doctrinally conservative, Christ-focused, and grace-emphasizing church. It embraces both the truths championed in the Protestant Reformation as well as a Baptist understanding of believer's baptism and local church autonomy.
Some refer to Reformed Baptists as Historic Baptists. This is because Reformed Baptists affirm the same doctrinal positions:
• That the English Puritan Baptists affirmed in the 1600s (these English Baptists, like Pilgrim's Progress author John Bunyan, were the founding fathers of most of today's Baptist denominations);
• That prominent Baptist leaders like Charles Spurgeon and William Carey affirmed in the 1800s; and
• That the Southern Baptist Convention affirmed up until the late 1800s.
Today's Reformed Baptist churches (like most Baptists before 1870) regard the 1689 London Baptist Confession of Faith as a concise summary of the Bible's main doctrinal teachings.
Reformed Baptist churches - like their Baptist forefathers - accept the foundational truths of the Protestant Reformation as essential to correct doctrine. These truths include the so-called Five Solas of the Reformation:
• Sola scriptura, or Truth based upon Scripture alone;
• Sola gratia, or salvation by grace alone;
• Sola fide, or salvation through faith alone;
• Solus Christus, or salvation through Christ alone; and
• Soli Deo gloria, or to God alone be all glory.
In practice, this means that Reformed Baptist churches hold to an inerrant and wholly sufficient Bible. The Word of God is our only rule for matters of faith and conduct.
It also means that Reformed Baptist churches emphasize salvation by grace alone (apart from man's works) based upon the substitutionary atonement of the Lord Jesus Christ on the cross. Sinners are declared righteous (or justified) by faith in Christ alone. And we respond to questions like, "Why did God create the world?" and "Why does God save sinners through Jesus Christ?" and "Why does God intervene in men's lives today?" by answering, "To showcase and draw attention to His glory." Accordingly, Reformed Baptists frequently summarize their life's purpose (or their chief end, as the Puritans put it) as glorifying God and enjoying Him forever.
While Reformed Baptist churches have great respect for godly men like Martin Luther, John Calvin, and Jonathan Edwards, they nonetheless are Baptist churches. They believe that although the Old Testament covenant community consisted of the physical offspring of Abraham (and therefore circumcision was administered to all male Hebrew infants), the New Testament covenant community consists of the spiritual offspring of Abraham, or only those who have embraced Jesus Christ by faith and have been born again. Accordingly, we administer baptism only to members of the covenant community- that is, only to those who have been regenerated, converted, and made partakers of the New Covenant. We also differ from Presbyterian churches regarding local church autonomy. Reformed Baptist churches often cooperate with one another and labor together, and even create associations to encourage mutual spiritual health and accountability. However, we locate local church authority in particular local churches and their own ordained elders/pastors, not in a denominational hierarchy or council.
Reformed Baptist churches are committed to evangelism and global missionary projects. Some assume (erroneously) that a Reformed church (i.e., one that embraces the total depravity of man, unconditional election, limited atonement, irresistible grace, and perseverance of the saints) will not be committed to fulfilling the Great Commission. Not true! Reformed Baptists are eager to preach the Gospel to every creature, not only because God has commanded that we do so but because we are confident that God will save His people when His Gospel - which is the power of God unto salvation - is proclaimed. Over the past three hundred years, Reformed Baptists have been at the forefront of many of the church's global missionary endeavors.
Grace and peace, Pastor Jeff Riddle
Posted by Jeffrey T. Riddle at 1:25 PM

Nicely said...Thanks for a concise and accurate definition.