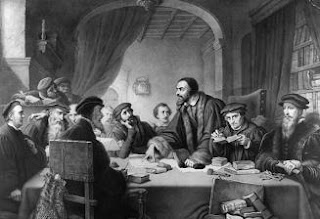 Note:  This is part thirteen in this ongoing series from Calvin on church government and office.

The third division which we have adopted is, by whom ministers are to be chosen. A certain rule on this head cannot be obtained from the appointment of the apostles, which was somewhat different from the common call of others. As theirs was an extraordinary ministry, in order to render it conspicuous by some more distinguished mark, those who were to discharge it behoved to be called and appointed by the mouth of the Lord himself. It was not, therefore, by any human election, but at the sole command of God and Christ, that they prepared themselves for the work. Hence, when the apostles were desirous to substitute another in the place of Judas, they did not venture to nominate any one certainly, but brought forward two, that the Lord might declare by lot which of them he wished to succeed (Acts 1:23). In this way we ought to understand Paul’s declaration, that he was made an apostle, “not of men, neither by man, but by Jesus Christ, and God the Father” (Gal. 1:1). The former—viz. not of men—he had in common with all the pious ministers of the word, for no one could duly perform the office unless called by God. The other was proper and peculiar to him. And while he glories in it, he boasts that he had not only what pertains to a true and lawful pastor, but he also brings forward the insignia of his apostleship. For when there were some among the Galatians who, seeking to disparage his authority, represented him as some ordinary disciple, substituted in place of the primary apostles, he, in order to maintain unimpaired the dignity of his ministry, against which he knew that these attempts were made, felt it necessary to show that he was in no respect inferior to the other apostles. Accordingly, he affirms that he was not chosen by the judgment of men, like some ordinary bishop, but by the mouth and manifest oracle of the Lord himself.

Analysis:  Calvin continues to insist that ministers are called first and foremost by the Lord himself and not by men.  Pastors must have a divine calling.