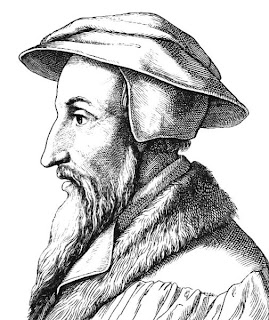 Note:  The discussion of calling continues in this eleventh part in our series from Calvin's Institutes on church government and offices.

The subject is comprehended under four heads—viz. who are to be appointed ministers, in what way, by whom, and with what rite or initiatory ceremony. I am speaking of the external and formal call which relates to the public order of the Church, while I say nothing of that secret call of which every minister is conscious before God, but has not the Church as a witness of it; I mean, the good testimony of our heart, that we undertake the offered office neither from ambition nor avarice, nor any other selfish feeling, but a sincere fear of God and desire to edify the Church. This, as I have said, is indeed necessary for every one of us, if we would approve our ministry to God. Still, however, a man may have been duly called by the Church, though he may have accepted with a bad conscience, provided his wickedness is not manifest. It is usual also to say, that private men are called to the ministry when they seem fit and apt to discharge it; that is, because learning, conjoined with piety and the other endowments of a good pastor, is a kind of preparation for the office. For those whom the Lord has destined for this great office he previously provides with the armour which is requisite for the discharge of it, that they may not come empty and unprepared. Hence Paul, in the First Epistle to the Corinthians, when treating of the offices, first enumerates the gifts in which those who performed the offices ought to excel. But as this is the first of the four heads which I mentioned, let us now proceed to it.

Analysis:  Calvin distinguishes between the "external and formal call" (conferred by men) to public ministry and the "secret call" (given by God alone).