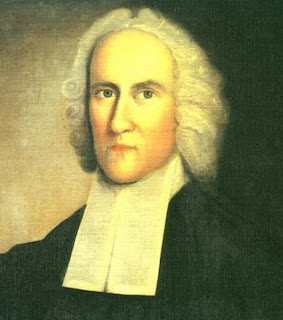 One of the classic sermons of all time is Jonathan Edwards’ “Farewell Sermon” preached to his congregation at Northampton, Massachusetts on July 1, 1750 (read it here; listen to an abridged reading here). Edwards delivered the message after being forced out as pastor. He had served the church for 23 years. During his tenure, the congregation had experienced the Great Awakening of 1734-35 but also the controversy of the “young folk’s Bible” episode and Edwards’ rejection of the “half-way covenant.” Historian George Marsden provides an insightful analysis of this period of Edwards’ life in his respected biography of the great colonial pastor and theologian (see Jonathan Edwards: A Life [Yale University Press, 2003], chapters 21 and 22, pp. 341-74; quotes below are from this work).

According to Marsden, Edwards’ removal began with the pastor’s suggestion of revision of the church’s government that was perceived to be “antidemocratic” (see Marsden, pp. 345-46). Edwards presented his ideas in a series of controversial sermons in June 1748. This disagreement was accompanied by disputes over the standards of admission to membership. Marsden notes: “In the poisoned atmosphere…. Rather than engage the real issues, they [the church members] complained to each other about how Edwards had not been open and honest with them” (p. 348).

By December 1749 Edwards would write to a friend, “The tumult is vastly greater than when you were here and is rising higher and higher continually” (p. 357). Marsden adds, “During the next few months matters only got worse as the town and church majority pushed relentlessly for Edwards’ removal” (p. 357). By the Spring of 1750 the church had sought outside consultation from an ad hoc committee of neighboring churches. “Edwards was painfully exasperated that he could not get the townspeople even to listen to his views” (p. 359). Marsden adds that one of Edwards’ opponents, his cousin Israel Williams, “made several vehement speeches against [Edwards], calling him a ‘tyrant’ who was ‘unsufferable’ in ‘lording it over [his] people’” (p. 359).

A council met from June 19-22, 1750. Marsden observes, “The minority argued for slowing down the process so as to be able to seek reconciliation. The vocal townspeople would hear nothing of delay. Only immediate separation would do” (p. 360). Of great personal disappointment to Edwards was the fact that one of the leaders in opposition to him was a young lawyer named Joseph Hawley III, Edwards’ cousin and a young man he had once praised as “a worthy pious man” (p. 358). Marsden notes that Edwards had “probably acted as something of a guardian and mentor” to Hawley after the suicide of the young man’s father (p. 358). The volatile Hawley was now firmly set against Edwards, however, and “would countenance no delay or mediation” in seeking his removal. When the council asked the church to express its will on the continuation of Edwards’ pastoral ministry, only 23 male members voted for Edwards and 230 against him. The council then approved his dismissal while at the same time declaring Edwards “‘eminently qualified for the work of Gospel ministry’ in any church that shared his views” (p. 361).

Edwards preached the “Farewell Sermon” on July 1, 1750. In the message he paints a compelling scene of pastor and people meeting before the throne of God on Judgment Day. Marsden notes that “Much of the congregation must have sat in sullen indignation as Edwards implied that he would be exonerated while many of them would be found irredeemably guilty on the last day” (p. 362).

At the start of the sermon Edwards states:

Ministers, and the people that have been under their care, must meet one another before Christ’s tribunal at the day of judgment.

Ministers, and the people that have been under their care, must be parted in this world, how well soever they have been united. If they are not separated before, they must be parted by death, and they may be separated while life is continued. We live in a world of change, where nothing is certain or stable, and where a little time, a few revolutions of the sun, brings to pass strange things, surprising alterations, in particular persons in families, in towns and churches, in countries and nations. It often happens, that those who seem most united, in a little time are most disunited, and at the greatest distance. Thus ministers and people, between whom there has been the greatest mutual regard and strictest union, may not only differ in their judgments, and be alienated in affection, but one may rend from the other, and all relation between them be dissolved. The minister may be removed to a distant place, and they may never have any more to do one with another in this world. But if it be so, there is one meeting more that they must have, and that is in the last great day of accounts.

It often comes to pass in this evil world, that great differences and controversies arise between ministers and the people under their pastoral care. Though they are under the greatest obligations to live in peace, above persons in almost any relation whatever, and although contests and dissensions between persons so related are the most unhappy and terrible in their consequences on many accounts of any sort of contentions, yet how frequent have such contentions been! Sometimes a people contest with their ministers about their doctrine, sometimes about their administrations and conduct, and sometimes about their maintenance. Sometimes such contests continue a long time, and sometimes they are decided in this world, according to the prevailing interest of one party or the other, rather than by the Word of God, and the reason of things. And sometimes such controversies never have any proper determination in this world.

But at the day of judgment there will be a full, perfect, and everlasting decision of them. The infallible Judge, the infinite fountain of light, truth, and justice, will judge between the contending parties, and will declare what is the truth, who is in the right, and what is agreeable to his mind and will. And in order hereto, the parties must stand together before him at the last day, which will be the great day of finishing and determining all controversies, rectifying all mistakes, and abolishing all unrighteous judgments, errors, and confusions, which have before subsisted in the world of mankind.

Edwards and his large family “remained awkwardly in Northampton for a year” after the dismissal (p. 363). It is sometimes favorably noted that he did on a few occasions fill the pulpit at Northampton after his dismissal, but Marsden makes clear that the church “always did so as a last resort and with great reluctance” (p. 364). In fact, Edwards’ ardent opponents “unhappy to continue to endure their ousted pastor” eventually gained a vote in a public meeting that he not be invited again “even if it sometimes meant going without preaching” (p. 364). Edwards and his family eventually moved to Stockbridge in June 1751 where he took up ministry among the Mohican Indians. Marsden concludes his analysis of Edwards’ departure from Northampton: “Once the bonds of affection were broken, each side, as in any controversy, soon saw the other as unreasonable and even perverse. In the Northampton case, the intensity of the feelings were heightened by the fact that the two parties has once been great lovers, each of whom now viewed themselves as betrayed” (p. 374).

Labels: Sermon of the Week

It saddens me so. Such a great gift to the church. Next time I feel rejected I shall think upon our dear Jonathan.

After years of impeccable annual reviews for faithful service at a "Christian" school --one whose auctions were regularly marked by public drunkenness-- I was summarily dismissed while on a bare-bones vacation with my family.

I'd fought against the serving of alcohol to alcoholics, stood strong against the admission of a brazenly-proud, transgender student, and stood up for the six kids, in four months, that had expressed suicidal ideation over their reported, repeated bullying by an increasingly secular student body.

Over the decade of my supervisor's tenure, the faith core of the school had gone from 80% evangelical (at its smallest), to 8% church attending (twenty years ago, at its inception, the institution had boasted 99% faith).

Naturally, my old boss is still in power... a man who had --in rare, one-on-one moments of vulnerability-- confessed an ongoing addiction to pornography, yet continually refused to so much as put a filter on his beloved electronic devices.

Rather, he insisted on making the school transition to each secondary student using a personal device (e.g., electronic tablet) to do all reading and homework. After two years, all but two boys, in the largest class, had confessed their addiction to using said devices for their own pornography addictions. Those tablets are still in use today-- three years after I alerted leadership.

I have often felt very alone...
until today.

When I poured over Jonathan Edwards' testimony, I sensed shared generational grief. My wife, four kids and I have "awkwardly remained" in our own community, even while changing churches and schools (both were, in some fashion, under the same umbrella of earthly authority as our former shepherd).

I will continue to love God, despite a sinful pull to divest myself from the mess of man's faith.
But it is very difficult to see my family suffer.

Still, we have not given our lives:

It hasn't come to that in America.
Not yet.