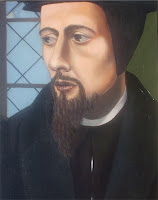 Note:  This is the sixteenth and final entry in our series from Calvin's Institutes of church government and offices.

It remains to consider the form of ordination, to which we have assigned the last place in the call (see chap. 4, sec. 14, 15). It is certain, that when the apostles appointed any one to the ministry, they used no other ceremony than the laying on of hands. This form was derived, I think, from the custom of the Jews, who, by the laying on of hands, in a manner presented to God whatever they wished to be blessed and consecrated. Thus Jacob, when about to bless Ephraim and Manasseh, placed his hands upon their heads (Gen. 48:14). The same thing was done by our Lord, when he prayed over the little children (Mt. 19:15). With the same intent (as I imagine), the Jews, according to the injunction of the law, laid hands upon their sacrifices. Wherefore, the apostles, by the laying on of hands, intimated that they made an offering to God of him whom they admitted to the ministry; though they also did the same thing over those on whom they conferred the visible gifts of the Spirit (Acts 8:17; 19:6). However this be, it was the regular form, whenever they called any one to the sacred ministry. In this way they consecrated pastors and teachers; in this way they consecrated deacons. But though there is no fixed precept concerning the laying on of hands, yet as we see that it was uniformly observed by the apostles, this careful observance ought to be regarded by us in the light of a precept (see chap. 14, sec. 20; chap. 19, sec. 31). And it is certainly useful, that by such a symbol the dignity of the ministry should be commended to the people, and he who is ordained, reminded that he is no longer his own, but is bound in service to God and the Church. Besides, it will not prove an empty sign, if it be restored to its genuine origin. For if the Spirit of God has not instituted anything in the Church in vain, this ceremony of his appointment we shall feel not to be useless, provided it be not superstitiously abused. Lastly, it is to observed, that it was not the whole people, but only pastors, who laid hands on ministers, though it is uncertain whether or not several always laid their hands: it is certain, that in the case of the deacons, it was done by Paul and Barnabas, and some few others (Acts 6:6; 13:3). But in another place, Paul mentions that he himself, without any others, laid hands on Timothy. “Wherefore, I put thee in remembrance, that thou stir up the gift of God which is in thee, by the putting on of my hands” (2 Tim. 1:6). For what is said in the First Epistle, of the laying on of the hands of the presbytery, I do not understand as if Paul were speaking of the college of Elders. By the expression, I understand the ordination itself; as if he had said, Act so, that the gift which you received by the laying on of hands, when I made you a presbyter, may not be in vain.

Analysis:  Calvin commends the practice of laying on of hands to ordain elders and deacons.  This should not be done by all the people but by the ministers only.  The ordination by laying on of hands is useful to represent "the dignity of the ministry" as long as it is "not superstitiously abused."