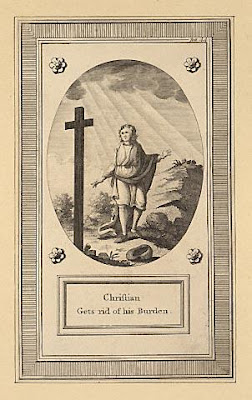 Note: In yesterday's sermon on Romans 6:5-14, I made reference to the scene in Bunyan's Pilgrim's Progress when Christian loses his burden as he gazes at the cross. Here is Bunyan's scene:
Now I saw in my dream, that the highway up which Christian was to go, was fenced on either side with a wall, and that wall was called Salvation. Up this way, therefore, did burdened Christian run, but not without great difficulty, because of the load on his back.
He ran thus till he came at a place somewhat ascending; and upon that place stood a cross, and a little below, in the bottom, a sepulchre. So I saw in my dream, that just as Christian came up with the cross, his burden loosed from off his shoulders, and fell from off his back, and began to tumble, and so continued to do till it came to the mouth of the sepulchre, where it fell in, and I saw it no more.
Then was Christian glad and lightsome, and said with a merry heart, "He hath given me rest by his sorrow, and life by his death." Then he stood still a while, to look and wonder; for it was very surprising to him that the sight of the cross should thus ease him of his burden. He looked, therefore, and looked again, even till the springs that were in his head sent the waters down his cheeks. Now as he stood looking and weeping, behold, three Shining Ones came to him, and saluted him with, "Peace be to thee." So the first said to him, "Thy sins be forgiven thee,"; the second stripped him of his rags, and clothed him with change of raiment; the third also set a mark on his forehead, and gave him a roll with a seal upon it, which he bid him look on as he ran, and that he should give it in at the celestial gate: so they went their way. Then Christian gave three leaps for joy, and went on singing,
"Thus far did I come laden with my sin,
Nor could aught ease the grief that I was in,
Till I came hither. What a place is this!
Must here be the beginning of my bliss?
Must here the burden fall from off my back?
Must here the strings that bound it to me crack?
Blest cross! blest sepulchre! blest rather be
The Man that there was put to shame for me!"
Posted by Jeffrey T. Riddle at 3:09 PM