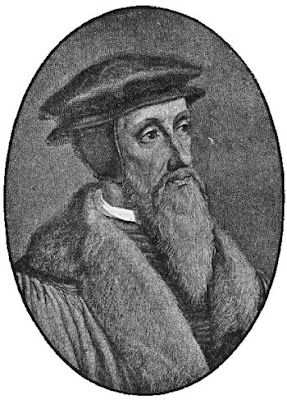 Temporary and permanent offices
We now understand what offices in the government of the Church were temporary, and what offices were instituted to be of perpetual duration. But if we class evangelists with apostles, we shall have two like offices in a manner corresponding to each other. For the same resemblance which our teachers have to the ancient prophets pastors have to the apostles. The prophetical office was more excellent in respect of the special gift of revelation which accompanied it, but the office of teachers was almost of the same nature, and had altogether the same end. In like manner, the twelve, whom the Lord chose to publish the new preaching of the Gospel to the world (Luke 6:13), excelled others in rank and dignity. For although, from the nature of the case, and etymology of the word, all ecclesiastical officers may be properly called apostles, because they are all sent by the Lord and are his messengers, yet as it was of great importance that a sure attestation should be given to the mission of those who delivered a new and extraordinary message, it was right that the twelve (to the number of whom Paul was afterwards added) should be distinguished from others by a peculiar title. The same name, indeed, is given by Paul to Andronicus and Junia, who, he says, were “of note among the apostles” (Rom. 16:7); but when he would speak properly, he confines the term to that primary order. And this is the common use of Scripture. Still pastors (except that each has the government of a particular church assigned to him) have the same function as apostles. The nature of this function let us now see still more clearly.
Analysis: Calvin draws a parallel between the temporary and permanent offices. The offices of Apostle and Evangelist are parallel to the role of the Pastor. The office of Prophet is parallel to that of Teacher.
Posted by Jeffrey T. Riddle at 1:56 PM