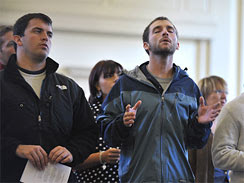 There was an AP article a few days ago titled, "Evangelists Target Spiritually Cold New England." It even got picked up in the Saturday edition of the Daily Progress.

The article notes the present difficult spiritual climate of New England:
In a Gallup poll this year, all six New England states were in the Top 10 least religious in the country, with Vermont, New Hampshire, Maine and Massachusetts claiming the top four spots. New England's religious apathy has developed over decades, but it's striking where the Pilgrims landed seeking religious freedom and the great 18th-century preacher Jonathan Edwards helped spark the First Great Awakening. Stately churches near town centers all over the region are reminders of the central importance religion once held. Massachusetts, Rhode Island and Connecticut do host the nation's heaviest concentration of Catholics, but those numbers have dropped substantially.
In 1990, 50 percent of New England residents identified themselves as Catholic; by 2008, it dropped to 36 percent following the clergy sex abuse scandal in Boston, according to American Religious Identification Survey 2008. Several groups trying to re-ignite New England's faith are theologically conservative, such as the Southern Baptists, Presbyterian Church in America and the Conservative Baptists' Mission Northeast. They say a reason for the region's hollowed-out faith is a pervasive theology that departs from traditional Biblical interpretation on issues such as the divinity of Jesus, the exclusivity of Christianity as a path to salvation and homosexuality.
One of the churches highlighted in the article is a new church plant, Redeemer Fellowship outside Boston, which JPBC offers support through our Missions Direct giving.
JTR
Posted by Jeffrey T. Riddle at 1:53 PM