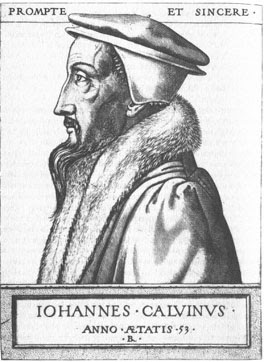 Note: This is the eighth in our series on Calvin’s views on church government (taken from the Institutes, Book IV, Chapter III).
The designation of ministers of the Word: presbyters
In giving the name of bishops, presbyters, and pastors, indiscriminately to those who govern churches, I have done it on the authority of Scripture, which uses the words as synonymous. To all who discharge the ministry of the word it gives the name of bishops. Thus Paul, after enjoining Titus to ordain elders in every city, immediately adds, "A bishop must be blameless," &c. (1 Tim 1:5, 7). So in another place he salutes several bishops in one church (Phil 1:1). And in the Acts, the elders of Ephesus, whom he is said to have called together, he, in the course of his address, designates as bishops (Acts 20:17, 28).
Here it is to be observed, that we have hitherto enumerated those offices only which consist in the ministry of the word; nor does Paul make mention of any others in the passage which we have quoted from the fourth chapter of the Epistle to the Ephesians. But in the Epistle to the Romans, and the First Epistle to the Corinthians, he enumerates other offices, as powers, gifts of healing, interpretation, government, care of the poor (Rom 12:7; 1 Cor 12:28).
As to those which were temporary, I say nothing, for it is not worth while to dwell upon them. But there are two of perpetual duration—viz. government and care of the poor. By these governors I understand seniors selected from the people to unite with the bishops in pronouncing censures and exercising discipline. For this is the only meaning which can be given to the passage, "He that ruleth with diligence" (Rom 12:8). From the beginning, therefore, each church had its senate [ Latin, "senatum."—French, "conseil ou consistoire;"—council or consistory], composed of pious, grave, and venerable men, in whom was lodged the power of correcting faults. Of this power we shall afterwards speak. Moreover, experience shows that this arrangement was not confined to one age, and therefore we are to regard the office of government as necessary for all ages.
Analysis: Calvin here lays out a threefold view of office. Calvin says that the ministers of the Word are referred to in the NT synonymously as bishops, presbyters (elders), or pastors. Drawing on Romans 12:7 and 1 Corinthians 12:28, however, he also argues for two other offices: (1) governors (ruling elders) who join with the bishops to form a senate or consistory and (2) those who serve the poor (deacons).
Posted by Jeffrey T. Riddle at 11:26 AM