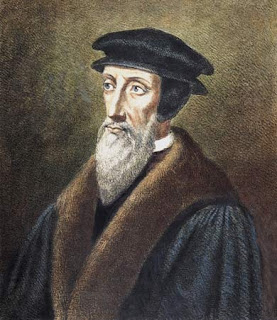 Note: Here is the third in our series from the Institutes on Calvin's views on church government.

The prestige of the preaching office in Scripture.


Accordingly, I have observed above, that God has repeatedly commended its dignity by the titles which he has bestowed upon it, in order that we might hold it in the highest estimation, as among the most excellent of our blessings. He declares, that in raising up teachers, he confers a special benefit on men, when he bids his prophet exclaim, “How beautiful upon the mountains are the feet of him that bringeth good tidings, that publisheth peace” (Isa. 52:7); when he calls the apostles the light of the world and the salt of the earth (Mt. 5:13, 14). Nor could the office be more highly eulogised than when he said, “He that heareth you heareth me; and he that despiseth you despiseth me” (Luke 10:16). But the most striking passage of all is that in the Second Epistle to the Corinthians, where Paul treats as it were professedly of this question. He contends, that there is nothing in the Church more noble and glorious than the ministry of the Gospel, seeing it is the administration of the Spirit of righteousness and eternal life (2 Cor 4:6; 3:9). These and similar passages should have the effect of preventing [i.e., preparing] that method of governing and maintaining the Church by ministers, a method which the Lord has ratified for ever, from seeming worthless in our eyes, and at length becoming obsolete by contempt. [McNeil offers this more contemporary translation of the previous sentence: "The purport of these and like passages is that the mode of governing and keeping the church through ministers (a mode established by the Lord forever) may not be ill esteemed among us and through contempt fall out of use"].

How very necessary it is, he has declared not only by words but also by examples. When he was pleased to shed the light of his truth in greater effulgence on Cornelius, he sent an angel from heaven to despatch Peter to him (Acts 10:3). When he was pleased to call Paul to the knowledge of himself, and ingraft him into the Church, he does not address him with his own voice, but sends him to a man from whom he may both obtain the doctrine of salvation and the sanctification of baptism (Acts 9:6-20). If it was not by mere accident that the angel, who is the interpreter of God, abstains from declaring the will of God, and orders a man to be called to declare it; that Christ, the only Master of believers, commits Paul to the teaching of a man, that Paul whom he had determined to carry into the third heaven, and honour with a wondrous revelation of things that could not be spoken (2 Cor. 12:2), who will presume to despise or disregard as superfluous that ministry, whose utility God has been pleased to attest by such evidence?

Analysis: For Calvin, teachers are given as "a special benefit on men." He emphasizes, in particular, their duty of preaching. The "governing and keeping" of the church is "through ministers." These are men especially called to declare the gospel.
Posted by Jeffrey T. Riddle at 3:03 PM