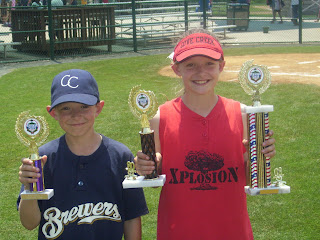 The closing ceremonies were held at Cove Creek last Saturday. Sam's team (The Brewers, great name for a tee-totaling family) did well but got knocked out of the year end tournament in the first round. Sam had a great season in his first year in the minor leagues (kid pitch), playing second base and pitcher for this team. He also got his first grand slam in one game and for a while got the nickname "Grand Sam." Sam also had the honor of being selected for the Cove Creek minor league all-stars, but we had to decline due to our summer plans and the fact that tournaments took place on Sundays.
Lydia played softball for the first time in the Cove Creek fast pitch minor league. She played shortstop and hit third in the lineup. Her team, the X-plosion, went undefeated (16-0) in the regular season and won the end of year tournament to finish a perfect season. Cove Creek offers three awards at year's end to players in each division: an mvp, a coach's award, and a sportsmanship award. Lydia was voted by her peers in the girls' minor league level with the sportsmanship award. We were surprised to hear her name called out for this and also very proud.
JTR
Posted by Jeffrey T. Riddle at 1:54 PM