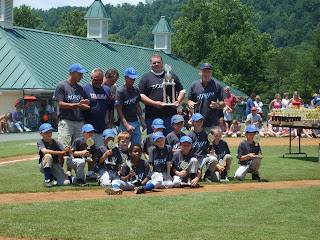 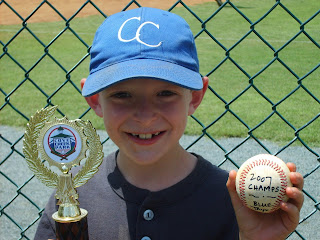 My son Sam's Rookie League (coach-pitch) team won the tournament championship this afternoon at the Cove Creek Park. The Blue Jays (mostly kids from the Red Hill/North Garden community) ended the season with a record of 15 wins, o losses, and 1 tie (the tie came in the very first game of the season). They defeated the Marlins 9-7 in the tournament championship and received their trophies in the closing ceremonies from Cove Creek Commissioner John Grisham (a novelist in the off-season). Tom Carter did a great job as head Coach. Sam played all six innings at pitcher in the championship game and hit lead off in the line-up (Can you tell I'm a proud Dad?).
JTR