Conrad Mbewe: The Spurgeon of Africa 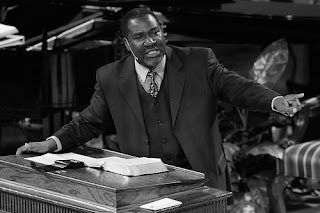 Conrad Mbewe preached at the recent True Church Conference in Alabama. I have been listening to some of his sermons online from a church leadership conference in Singapore (look here). This former engineer was called to become the Pastor of Kabwata Baptist Church in Zambia. A 2003 profile article in World (later reprinted in Banner of Truth), describes his rough start in pastoral ministry with which most Reformed minded Pastors can relate:

The growth proved to be the pastor's hardest test. Twenty members left over changes he instituted. When he arrived at Kabwata, he found a team of deacons and one elder heading the church. Within two years he created an eldership and divided the duties, which left the deacons out of some decision making. He also introduced Reformed theology.

Church members accused him of singling them out in sermons and said he was unfit to be a pastor. Dapson Mwendafilumba, a member who disagreed with Mr. Mbewe, argued in the pastor's book-lined study that Mr. Mbewe wasn't practising what he preached. "He was not being more of a caring pastor in terms of visiting when he left the pulpit," he said. "I called him an actor. I said, 'Look here, you don't seem to marry the two."' Mr. Mbewe described the period as the "worst in his ministerial life."

He used to joke, "If I coughed, people would say 'He's coughing too much,' or if I didn't cough they'd say, 'Why isn't he coughing? Isn't he human?"'

So five years into his pastorate; the congregation had to vote on whether it wanted him to stay or go. In the end, 92 percent of the congregation voted for Mr. Mbewe to stay. Mr. Mwendafilumba, who joined another church, said they are on good terms now. He maintains that Mr. Mbewe could have gone slower on the reforms. Mr. Mbewe agrees. "He is very headstrong and likes to lead, likes to push," said Mr. Bota. "He's rarely in a position where there's another guy that's better than him. He tends to get what he wants done, done."
Reflections:
1. Church reform is arduous spiritual work no matter what the cultural context.
2. God is at work in the world today raising up faithful churches to reclaim Biblical theology.
JTR
Posted by Jeffrey T. Riddle at 4:21 PM