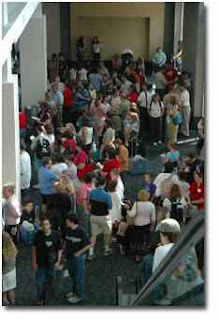 Been meaning to blog this. Llewellyn and I went to the annual HEAV meeting last Thursday-Saturday in Richmond. This year Hannah (13) also went with us, while Ben and Vanessa kept our other kids, Lottie the dog, the two hound puppies we were keeping for a friend, and the chickens at home.
The keynote speakers this year were Doug Philips of Vision Forum and Ken Ham of Answers in Genesis.
In the Friday morning keynote, Philips spoke on "Providence and Perseverance: A Homeschooler’s Vision for America’s 400th Birthday Party." Philip’s is leading a Christian celebration of the founding of Jamestown this weekend. Philips argued that Jamestown gave the US:
1. America’s Great Commission Birth Certificate;
2. The Bible;
3. Christian Worship;
4. Gospel conversions;
5. Origins of republican, representative government;
6. Bible based common-law.
He noted, "Those who control the history, define the culture."
I also attended Friday sessions with Bill Potter (Vision Forum’s resident historian) on "The Great Awakening in Virginia." We went to lunch with Melia Hatfield from JPBC. Hannah and I also went together to Doug Philips’ afternoon session on "The True Legacy of Pocahontas and John Rolfe." Philips noted the current attempts to demythologize the Pocahontas story.
There was also time Friday for perusing the exhibition area and the used curriculum and book sale.
Saturday morning’s keynote was Ken Ham on "Genesis of a Godly Legacy: Raising Godly Children." Ham spoke of how his evangelical father influenced him to pursue apologetics. We went to lunch with our friend Renee Shockley from our previous church, Beulah, in Warsaw. Hannah and I went later to his session on "Why Won’t They Listen? How to Reach Today’s Culture." Ham noted that most folk in America today (including in evangelical churches) are "Greeks" (pagan in thought) rather than "Jews" (steeped in Bible tradition). He criticized the evangelical church for over-emphasis on music praise and worship and not giving enough time to extensive Biblical teaching. Ham is a gifted populizer and speaker.
It is always encouraging to get around thousands of homeschooling families. It is a diverse lot. We bought books for the next year of schooling. It took much restraint not to buy more. I did pick up two books: Gary Demar’s Last Days Madness (been meaning to bone up on preterist eschatology) and a copy of the 1599 Geneva Bible.
JTR
Posted by Jeffrey T. Riddle at 2:47 PM