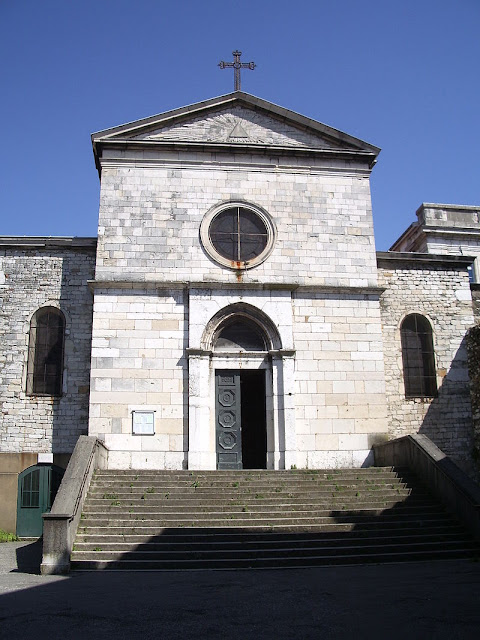 Image: St. Irenaeus Church in Lyon, France, which dates to the 9th century and is named for the early bishop Irenaeus.

This is an occasional series of readings from and brief notes and commentary upon Eusebius of Caesarea’s The Ecclesiastical History: Book 5, chapter 7. Listen here.

In this chapter Eusebius again draws on Irenaeus’s Against Heresies [book 2] (called here: Refutation and Overthrow of Knowledge falsely so-called). We again see the importance of Irenaeus as a source for Eusebius.

The subject is the continuation of extra-ordinary gifts in the early post-apostolic church.

On one hand, Irenaeus describes the continuation of various miraculous gifts in this time, including the casting out of evil spirits, foreknowledge of future events, visions, prophetic speech, healing of the sick, and even the raising of the dead.

On the other hand, Irenaeus seems to acknowledge a difference between what was being done in his days in comparison to what Christ and the apostles had done. So, he says, “But they [the extraordinary deeds of his times] fall so short of raising the dead as did the Lord and his apostles….”

The focus instead is on making the case from the prophets that Jesus is the Son of God and that his miracles were true and that the brethren who had the “gifts of prophecy” were using them so as to “bring the hidden things of men into clearness for the common good and expound the mysteries of God.”

The particular stress is on the fact that these extraordinary acts of ministry were for “the benefit of the heathen, deceiving none and making profit from none”, and so it is a defense of the purity and wholesomeness of the early Christian movement.

What is more, Eusebius seems to be looking back on this from the perspective of the early fourth century as something that was taking place in the days of Irenaeus, but which had ceased in his own day.