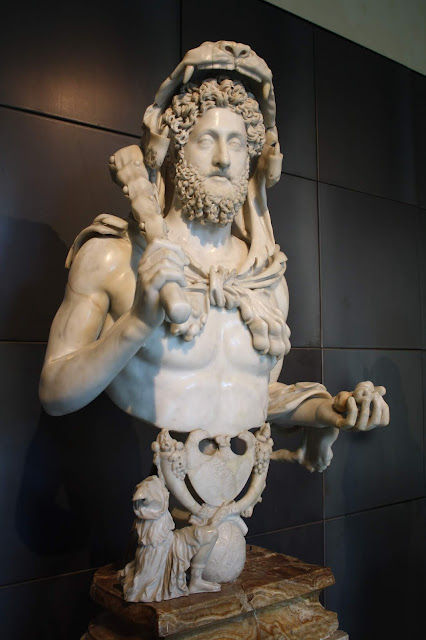 Image; Marble bust of the Roman emperor Commodus as Hercules, c. AD 192, Capitoline Museum, Rome, Italy. Rhodo the Asian would have written, in  part, sometime during the time of Commodus (emperor, AD 180-192).

This is an occasional series of readings from and brief notes and commentary upon Eusebius of Caesarea’s The Ecclesiastical History: Book 5, chapter 13. Listen here.

This chapter introduces Rhodo the Asian, who had been a pupil of Tatian in Rome. For Tatian and his involvement with a heretical sect known as the Encratites, see EH 4.29.

Rhodo is said to have composed several works, including one against the arch-heretic Marcion.

Citations are given from Rhodo's work, noting several heretical teachers within the Marcionite movement, who often put forward contradictory opinions, including:

Apelles, an aged man, how taught one “Principle” (Lake: “Source of being” or “Beginning” or “God”), but who was influenced by the utterances of a “possessed maiden” named Philoumene.

Marcion himself, meanwhile, argued for “two Principles” and was followed by Potitus and Basilicus. He is called “the wolf of Pontus.”

Finally, a man named Syneros even argued for “three Natures.”

Rhodo is cited as having personally spoken to and argued with Apelles. Two problems are noted with his thinking: (1) he did not provide any argument to justify his belief in “one Principle” (God); and (2) persistence in good works were needed for salvation.

Citing again Rhodo’s writings (addressed to Kallistio), reference is made to a work by Tatian “on Problems”, in which “he undertook to set out what was unclear and hidden in the divine Scriptures.”

Eusebius also notes a work by Rhodo on the Hexaëmeron (the six-day creation), while Apelles is condemned for “countless impieties against the law of Moses.”

This chapter reflects ongoing concerns related to distinguishing orthodoxy from heresy. Rhodo seems to be a teacher who stood somewhere in the middle of these contentions. On one hand, he describes and refutes heretics like Marcion, but, on the other, he was a student of Tatian. Defense of the truth is often engaged in murky circumstances.