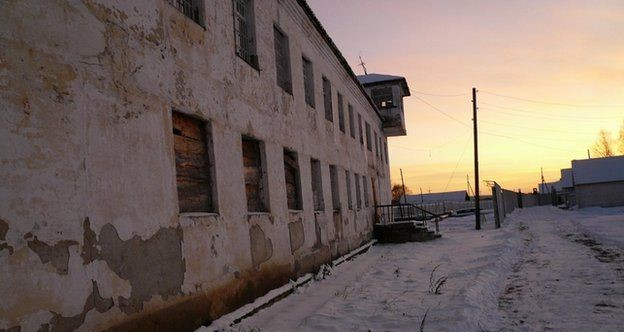 Image: Remains of the Administration Building of Perm-36, a Stalinist era Gulag in the Ural Mountains of Russia.

Then came Jesus forth, wearing the crown of thorns, and the purple robe. And Pilate saith unto them, Behold the man! (John 19:5).

In v. 5 the Lord Jesus himself, having been scourged and mocked, is brought forward by Pilate before the Jewish authorities. This is a new level of public humiliation.

Pilate declares, “Behold the man (anthropos, the human being)!” Many know this from the Latin translation: Ecce homo!

This really becomes the central scandal of the Christian gospel. How can this man also be Lord? As Paul will write, “But we preach Christ crucified, unto the Jews a stumbling block, and unto the Greeks foolishness” (1 Cor 1:23).

First, we can mediate on Pilate’s declaration: Behold the man! Christ stands before us today. And he is the humiliated Christ, the crucified Christ. Will we turn our backs on him or, worse still, actively reject and attempt to suppress him? Or will we turn in repentance and faith to embrace him?
Second, will we follow in the footsteps of Christ? Christ was willing to suffer wrong and to trust in God alone to vindicate his cause. When Peter wrote to Christian servants he urged them to embrace that same attitude (see 1 Peter 2:19-25)” “because Christ also suffered for us, leaving us an example” (v. 21).
I recently read the book One Day in the Life of Ivan Denisovich by the Russian dissident Aleksandr Solzhenitsyn. The novel describes life in a Soviet prison camp during the Stalinist era, from the perspective of Shukhov (Ivan Denisovich), one of its unjustly imprisoned inmates. It is a place of misery and suffering. There is a recurrent character in the novel, one of Shukhov’s fellow prisoners, who is named Alyoshka, and who is most often referred to as, “the Baptist.” He and others from his “Baptist club” (as Shukhov calls it) were sentenced to twenty five years of hard labor, just because they were Baptists. The narrator describes the Baptist as praying, whispering to his fellow Baptists on Sundays, never stealing, copying the NT in his notebook, and, at one point near the end, telling his fellow prisoner, “Be glad you’re in prison. Here you have time to think about your soul.” The narrator adds: “You could tell from his voice and eyes that he was glad to be in prison.”
It is a picture of something that is true of Christians, because they follow the example of Christ. Even when suffering and exposed, even when the world points in derision and says, “Behold the man!” they know that all is well with them, because they trust the God who made them, the God who redeemed them, and the God who will vindicate them.
Grace and peace, Pastor Jeff Riddle