Eusebius, EH.1.7: Harmonizing the Genealogies of Matthew and Luke 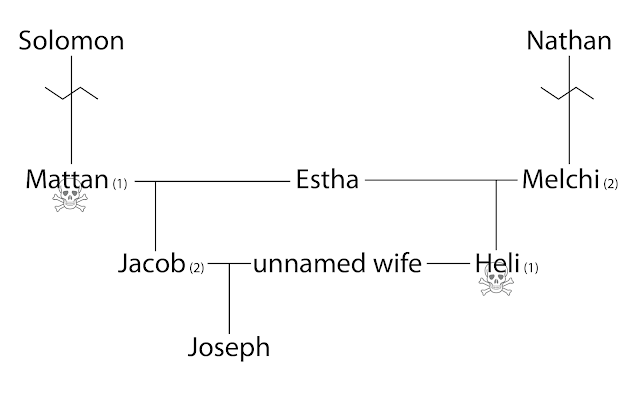 Image: This chart represents the view espoused by Eusebius, drawing on Africanus, for harmonizing the genealogies of Matthew (left) and Luke (right).

A new installment from Eusebius of Caesarea’s The Ecclesiastical History has been posted: book 1, chapter 7 (Listen here).

Eusebius argues that “neither Gospel misstates, reckoning both nature and law.” He adds, “both accounts are strictly true … in a manner complicated but accurate.”

Lake explains in a footnote:

“The point of this obscure argument is that among the Jews if a man died childless his brother was charged with the duty of begetting children of the widow, who was still reckoned as the wife of the deceased. Such children were legally regarded as the sons of the dead brother, though known to be actually the children of the living one. This happened in the case of Joseph. He was legally the son of Eli [Heli], physically of Jacob. A further complication was that Eli and Jacob were only half brothers. They were the sons of the same mother, Estha, but Eli was the son of her second husband, Melchi, descended from Nathan the son of David, and Jacob was the son of her first husband Mattan, descended from Solomon the son of David. Thus, Matthew giving the physical descent of Jesus traces it through Jacob to Solomon, but Luke (who avoids the word ‘begat’) giving the legal descent traces it through Eli to Nathan” (n. 2, pp. 56-57).
I agree with Lake that this explanation is “obscure.” A simpler harmonization would be to say that Matthew provides the legal line through Joseph, a descendent of David through Solomon, and Luke, the natural line through Mary, also a descendent of David but through Nathan, thus making Heli the father of Mary not Joseph in Luke 3:23.

Eusebius also makes reference to traditions handed down “by the human relatives of the Savior,” that Herod the Great had attempted to obscure.

Herod the Great had tried to burn family records to hide his origins but private records were preserved, again by the family of Jesus, which tell the true story of his descent.
Finally, Eusebius adds that the Jewish practice requiring tribes to marry among their own also argues for Mary as from the tribe of Judah.

This analysis provides an excellent example of early Christian pre-critical analysis of Scripture, which seeks to harmonize the canonical Gospels and assumes them to be historically reliable.