Eusebius, EH.1.8: The Death of Herod the Great 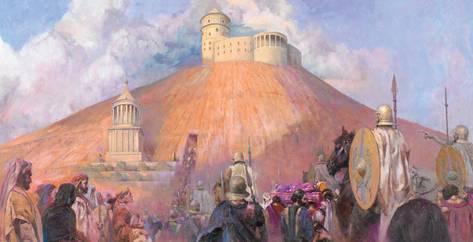 Image: The funeral procession of Herod the Great to his mausoleum at Herodium in 4 BC. Illustration by Hong Nian Zhang.

A new installment has been post to the series on Eusebius of Caesarea’s The Ecclesiastical History: book 1, chapter 8 (Listen here):

This chapter describes the ignoble end of Herod the Great and recalls the Biblical adage that as a man sows, so shall he reap (cf. Gal 6:7).

Eusebius draws on Matthew’s account of the visit of the magi at the birth of Jesus and the massacre of the innocents in Bethlehem.

He also draws on the accounts in Josephus, from both his Antiquities of the Jews and the Jewish War, of Herod’s miserable suffering with disease, including gangrene in his genitals and “breeding worms”, his plan to take captive and murder a crowd in the Hippodrome so that there would be weeping at his death, and the murder of a third son before his death.

Eusebius sees Herod’s suffering was an act of God’s justice for his murder of the innocents at Bethlehem.

Lastly, he returns to Matthew’s account of Joseph bringing Jesus to Galilee from Egypt at Herod the Great’s death.