Calvin on the angel stirring the water during an age of cessation (John 5:3b-4) 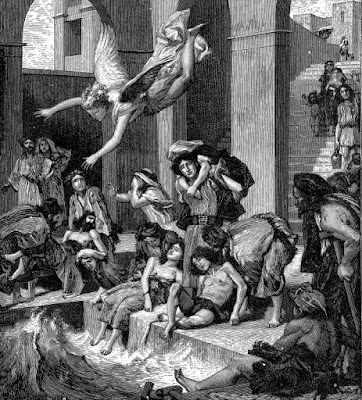 I preached last Sunday on the opening of John 5, the healing of the impotent man at Bethesda (vv. 1-16). In his commentary on this passage, Calvin does not acknowledge the textual difficulties of vv. 3b-4 relating to the angel coming down to stir the waters. Instead, he simply accepts this passage as part of the undisputed text. He does, however, provide an intriguing explanation for the unusual circumstances, interpreting the strange stirring of the water in the pool of Bethesda as an unusual demonstration of the Lord’s intervention into earthly affairs during a time when the prophetic spirit had largely been withdrawn. So, Calvin observes:

But about the time of Christ’s coming, as they were deprived of the Prophets, and their condition was very wretched, and as various temptations pressed upon them on every hand, they needed this extraordinary aid, that they might not think that God had entirely left them, and thus might be discouraged and fall away. For we know that Malachi was the last of the Prophets, and, therefore, he closes his doctrine with this admonition, that the Jews may remember the law delivered by Moses (Malachi 4:4) until Christ appear. God saw it to be advantageous to deprive them of the Prophets, and to keep them in suspense for a time, that they might be inflamed, with a stronger desire for Christ, and might receive him with greater reverence, when he should be manifested to him.

I was intrigued by this statement with regard to recent thoughts on canon. Calvin and other Reformers reject the apocrypha, in part, because they did not see it as emerging during an age of active prophesy. This was the first of William Whitaker’s three arguments against the inspiration, and thus the canonicity, of the apocryphal books in his Disputation (see pp. 49-54; the second argument being that that these books were not accepted as canonical by the Jews, and the third that their content was non-canonical [uninspired]). Calvin sees the time between the last OT Prophet (which he takes to be Malachi) and the coming of Christ as a “dead zone” with regard to the activity of the prophetic spirit. Again, the test of canonicity for any book is not the decision of the church but the inspiration of the Spirit.

Who do the creds for the illustration of the angel troubling the waters of Bathesda belong to?