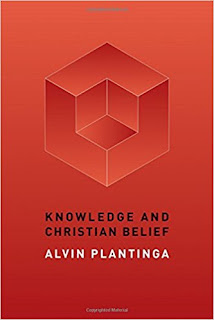 Plantinga argues that moral categories do not necessarily apply to beliefs. He gives this illustration:

If I fell out of an airplane at 3,000 feet, I would fall down not up; and it wouldn’t be up to me which way I fell… my falling down isn’t something that can be morally evaluated. I can’t sensibly be either praised or blamed for falling down.

And isn’t the same thing true for religious belief? I am a theist; I believe that there is such a person as God; but I have never decided to hold this belief. It has always just seemed to me to be true. And it isn’t as if I could rid myself of this belief just by an act of the will (17).

He later connects this to Calvin’s notion of the sensus divinitatis, or sense of divinity, which is “subject to malfunction” (33).

After reviewing Freud’s rejection of theism as “wish-fulfillment,” Plantinga turns the argument on its head:

Indeed, unbelief can also be seen as resulting from wish-fulfillment—a result of the desire to live in a world without God, a world in which there is no one to whom I owe worship and obedience (44).