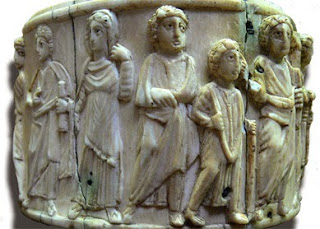 Image:  A fifth century pyxsis with scenes from John's Gospel, including the woman caught in adultery.

I posted to sermon audio today WM # 53 Interview: James Snapp's Book on the PA (John 7:53--8:11).  This episode features my phone interview with James Snapp on the PA.  Sound quality is choppy at times.  Thanks for your patience in listening.

Snapp's book recently got  a shout out on the Evangelical Text Criticism blog (see here), where he makes regular comments.

Snapp is pastor of Curtisville Christian Church in Elwood, Indiana. Though we have some obviously significant theological and ecclesiological differences, we do share some common interests in defending traditional NT texts like the ending of Mark and the PA. As Snapp describes it, text criticism is a work-related hobby that has turned into an obsession for him. He regularly posts articles on text criticism on his blog, "The Text of the Gospels," and elsewhere.

In this episode we discuss Snapp's new e-book:  A Fresh Analysis of John 7:53-8:11:  With a Tour of the External Evidence.

Though Snapp holds to what he calls "Equitable Eclecticism," which leads him essentially to a Byzantine Text position as the best "reconstructed" text, he has common ground with confessional text advocates in defending the authenticity of passages like the PA.  As Snapp put it at the end of the episode, he's rather set sail on a ship with a few barnacles (the TR, in his view) than one filled with holes (the modern critical text).

I agree AJ. This is one of the problems with the reconstructionist position (whether modern critical text or Majority Text). It is left with an essentially open canon.