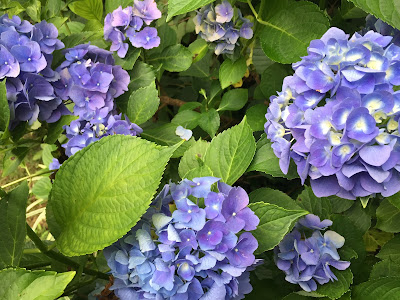 I wonder how many pastoral prayers in Christian worship services throughout the nation yesterday lifted up petitions based on recent news headlines (e.g., racial tensions in America; police shootings in Dallas; etc.).  Should our public prayers be based on the most recent news cycle, whatever their increasing brevity?  My guess is that these items were the focus of many corporate prayers yesterday.  I even heard a news item on the radio this morning which offered audio clips from various services (mainly in African-American churches in this report) from such prayers and announcements.  Perhaps it gives a sense of relevance to a church’s ministry and to its prayer life to follow this route.  My guess is most folk in the pews approve such prayers.
Still, I did not mention these matters in my pastoral prayer at CRBC yesterday.  It was deliberate decision, a protest against media management of our liturgy.  I do not say this to convey some kind of perverse Puritan “virtue-signaling” (I and my church are better/holier/more righteous than thou).  In the past I have lifted up these sorts of news-driven requests (the latest reported shooting, natural disaster, scandal, public crisis, etc.).  One might even argue for a Biblical precedent for such things in the court prophets.  One might point to historical precedents in the various days of prayer, thanksgivings, and mourning over national events from the Puritans through Spurgeon and beyond.  I’m not saying I will never offer prayer relating to some particular event of contemporary or national interest.  I’m not saying the particular topics from last weekend should not be objects of prayer.  We should pray for peace in our communities, for harmony among diverse ethnic groups, for those in authority (including the police).  We do, in fact, make these objects of regular prayer in our corporate worship.

Again, I just don’t want our church’s prayer life dictated by secular media.  I came to this conclusion particularly as I mulled over this most recent series of “if it bleeds, it leads” stories.  Left-leaning media promoted isolated stories of police use of deadly force against black men who were under suspicion of having done something wrong.  The press most likely did this in an election year to manipulate the black electorate into supporting Democratic candidates.  Left-leaning pundits and even the President made rush to judgment statements, driven by similar political motivations and convictions, before it could possibly be made clear what had really happened.  A sick man reacted with a racist and murderous attack on the police.  More pundits, left and right, rush in to analyze, debate, and capitalize.

I want to opt out of this sort of man-made crisis as the focus of our corporate prayer.  There is a real sense in which I do not want to be “Reformed and relevant.”  I want the service of worship to be other-worldly and even irrelevant, humanly speaking.  I can find precious little in Paul’s letters where he mentions with any specificity any event from contemporary Roman society and makes it an object of discussion or prayer in the gatherings of believers.

It was a quiet protest.  No one else probably even noticed (though I suppose they might now if they read this post).  But as a leader of public worship it left my conscience clear.

You know, I have always prayed over issues like this out of habit and I know everyone else has as well. What you are saying reminds me of a video I saw recently that was done by The Masters Seminary and John MacArthur. After watching that video and reading this post, I agree with you guys and will pray as a Pilgrim in a foreign land amongst hostile natives (The world). Thanks for sharing. The link to that video if you are interested is as follows: https://youtu.be/VHCweIfYjIg