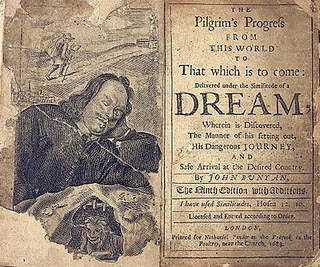 Hebrews was originally written to encourage Jewish Christians not to abandon Christ. the author intones:  If they have truly known saving faith they will be granted enduring faith.  Their perseverance in the faith, in the end, does not depend upon their faithfulness but upon the Lord’s faithfulness to them.

In the second part of Bunyan’s Pilgrim’s Progress there is a scene in which the pilgrims are passing through the Valley of Humiliation, described as “a valley that nobody walks in, but those that love a pilgrim’s life.”  Honest and the guide Great-Heart begin discussing a previous pilgrim named Mr. Fearing.  Honest says he knew him well, affirming he had “the root of the matter” but “he was one of the most troublesome pilgrims that ever I met with in all my days.”  Great-Heart says he knew of Mr. Fearing’s weaknesses, but, he adds,  “I could very well bear it, for men of my calling are oftentimes entrusted with the conduct of such as he was.”

Great-Heart then describes his guidance of Mr. Fearing on his pilgrimage to the Celestial City.  He notes, “Why he was always afraid that he should come up short of whither he had desire to go,” adding, he had “a slough of despond in his mind, a slough that he carried everywhere with him.”

Great-Heart then tells how Mr. Fearing eventually reached the final river which each pilgrim must pass over to reach the Celestial City. Upon arrival, Great-Heart says he noticed what was “very remarkable:  the water of that river was lower at this time than ever I saw it in all my life.”  So even Mr. Fearing was able to pass over “not much above wet-shod” and enter the city.

J. Gresham Machen ends his book What is Faith?  with reference to Bunyan’s Mr. Fearing, adding these final words:

Such is the blessed end of the man of little faith.  Weak faith will not remove mountains, but there is one thing that it will do: it will bring a sinner to peace with God.  Our salvation does not depend upon the strength of our faith; saving faith is a channel not a force.  If you are really committed to Christ, then despite your subsequent doubts and fears you are His for ever (p. 251).

Grace and peace, Pastor Jeff Riddle
Posted by Jeffrey T. Riddle at 8:45 AM

Nice post, Padre. I never thought about it that way.