Hebrews and the Pauline Letter Collections 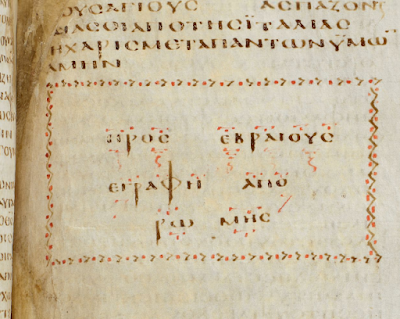 Image:  The subscription of Hebrews in Codex Alexandrinus:  To the Hebrews, written from Rome [pros hebraious egraphe apo romes]

I am preaching through Hebrews on Sunday mornings at CRBC, and I am continuing to contemplate the question of its connection to Paul and the Pauline corpus.  There is an intersection here with my interests in the questions of text, canon, and preservation.

In this regard I have recently been helped by reading David Trobisch’s Paul’s Letter Collection (Augsburg Fortress, 1994; Quiet Waters, 2001) and by starting to work my way through Harry Y. Gamble’s Books and Readers in the Early Church (Yale University Press, 1995).  Both works discuss how Paul’s letters were collected as a distinct group by Christians at a very early stage. I am not in agreement with the final conclusions of either of these works on Paul’s letters, but I am thankful for the information and insights both books provide.

Trobisch  notes how early Christians collected and circulated the NT books in four major groups or collections:  the four Gospels, Acts and the Catholic Epistles, Paul’s Epistles, and Revelation.  Of 779 early Greek manuscripts he surveyed only 59 had a complete NT [no doubt more manuscripts are available today than when Trobisch wrote this work, but new finds would likely only follow and confirm this pattern].  271 had Paul’s letters added to Acts and the general epistles.  213 had only Paul’s letters.  Most of the earliest copies of Paul’s letters were not found in complete NT manuscripts but in collections like these.  Here is a modification of a table Trobisch provides on p. 12:

Key for TABLE ONE:

TABLE TWO:  THE ORDER OF PAUL’S LETTERS IN GREEK MANUSCRIPTS

Notes on columns in TABLE TWO:

(1)  In the “Majority Early Order” of manuscripts which originally contained the entire NT, including the oldest uncial manuscripts of the NT (Sinaiticus, Alexandrinus, Vaticanus, Ephraemi Rescriptus), Hebrews is included among the Pauline letters and placed after 1-2 Thessalonians and before the “personal” letters (1-2 Timothy, Titus, Philemon).  This is also the order followed in the Robinson/Pierpont Byzantine Greek NT (2005).

(2)  Codices Boernarianus (G) and Augiensis (F) are collections of Paul’s letters only.  They are noteworthy for the fact that that they do not include Hebrews.

(3)  Codex Claromontanus (D) contains Paul’s letters only.  It is noteworthy for the fact that Colossians comes before Philippians.  It apparently originally ended at Philemon and was followed by three blank pages.  Later, a Latin list of the canonical books was copied there (called the Catalogus Claromontanus).   After this Hebrews appears.  See Trobisch's discussion, p. 13.

(4)  Papyrus 46 is the oldest known collection of Paul’s letters (dated to c. A. D. 200).  The beginning and ending are missing (begins at Romans 5:17 and ends at 1 Thessalonians 5:28).  Hebrews appears after Romans and before 1-2 Corinthians.  It also has Ephesians before Galatians.

(5)  Gamble reconstructs Marcion’s ten letter Pauline corpus based on descriptions in Tertullian (adv. Marc., 5) and Epiphanius (Pan.9.4, 11.8, 12) and argues that this order reflects an ancient Pauline corpus with letters to seven churches ordered by length (Corinthians, Romans, Ephesians, Thessalonians, Galatians, Philippians, Colossians-Philemon) (see pp. 59-60, 272, n. 73).  Hebrews and the Pastoral Epistles are not included in Marcion.  Gamble’s “seven church hypothesis” is pure speculation, given the evidence.  It is not supported by any existing manuscript of Paul’s letters, and it fails to consider Hebrews as a Pauline epistle, something Marcion apparently rejected, but which seemed to be assumed by most early collectors of Paul’s writings.

(6) What Trobisch calls “the Authorized Byzantine Version” (pp. 4-5) reflected in the Greek manuscripts copied from the eleventh century forward (and comprising 85 percent of all extant Greek manuscripts) uses what became the standard canonical order for Paul’s letters in the NT.  This was the order followed by the Textus Receptus and reflected in the vernacular translations made from it in the Reformation and post-Reformation period.

Paul’s letters began to circulate as a distinct collection at a very early stage in early Christianity (cf. especially 2 Peter 3:15-16 which indicates Paul’s letters were both circulating and acknowledged as “Scripture [graphe]” even before the completion of the NT canon).

The book of Hebrews was included at a very early stage in the collection of Paul’s letters.  This inclusion was controversial and not supported by all.  The strength of this early tradition, however, gives credence to the proposal of Pauline authorship of Hebrews that cannot be overlooked.