The Gospel of Mark in Vaticanus famously ends, of course, at Mark 6:8.  It is one of only three extant ancient Greek mss. which end Mark at 16:8 (the others being codices Sinaiticus and 304).  The odd things is that Mark ends in the middle of column two but column three is left blank, and the text of Luke does not begin until column one of the next page.  This perhaps indicates that the scribe was confused or concerned about the abbreviated ending or even intended to add the Longer Ending, though it is questionable as to whether Mark 16:9-20 would fit within the remainder of column 2 and in the blank column three.  Perhaps, however, he intended to continue the text in column one of the next page, where Luke now begins.

Jakob Van Bruggen made this observation about the ending of Mark:

“There are only three known Greek manuscripts that end at 16:8, and one of them has a large open space after verse 8.  All the remaining Greek manuscripts contain verses 9-20 after Mark 16:1-8, and most of them do not have a single note or insertion of other data.  Mark 16:1-20 has both the authority of the Majority Text, as well as the authority of oldest text.  If it still remains uncertain whether Mark 16:9-20 is well attested textually, then very little of any of the text of the New Testament is well attested" (The Future of the Bible [Thomas Nelson, 1978]:  p. 131).

The pictures below, drawn from the online Vaticanus, allow us to compare the endings of the four Gospels in codex Vaticanus and note how the ending of Mark presents an anomalous pattern: 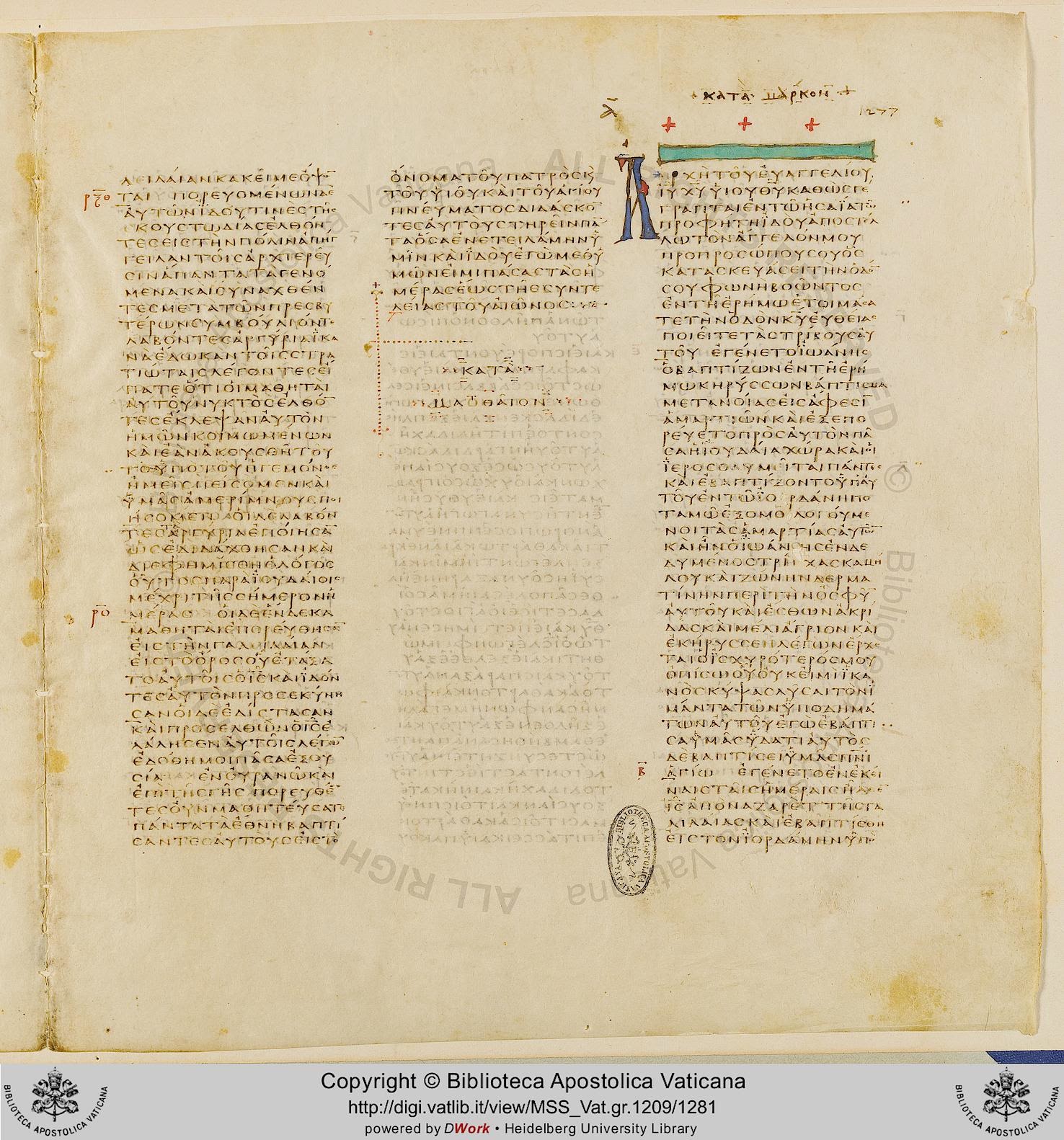 Image:  Ending of Matthew in column two; beginning of Mark in column three. 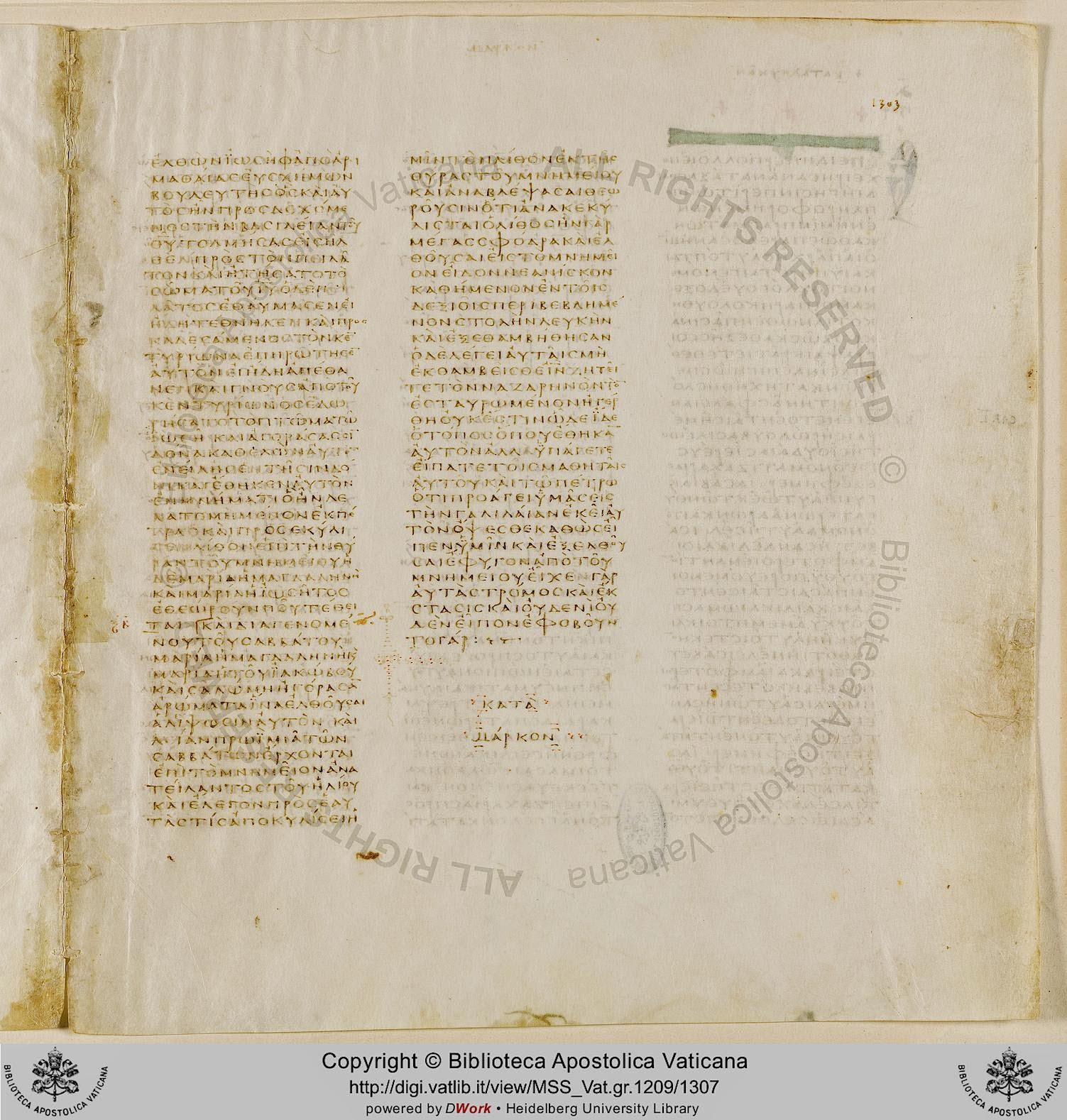 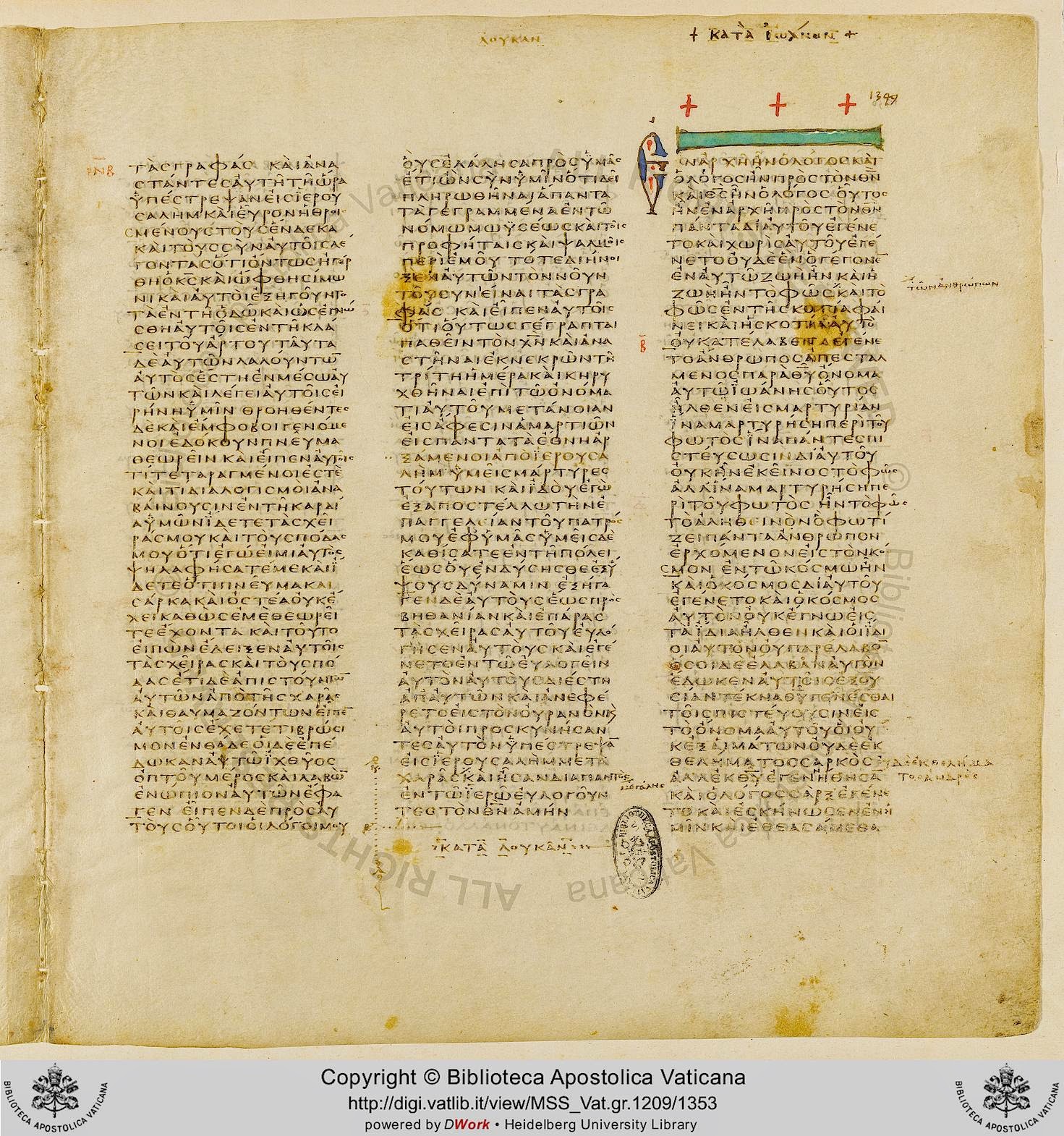 Image:  Ending of Luke in column two; beginning of John in column three. 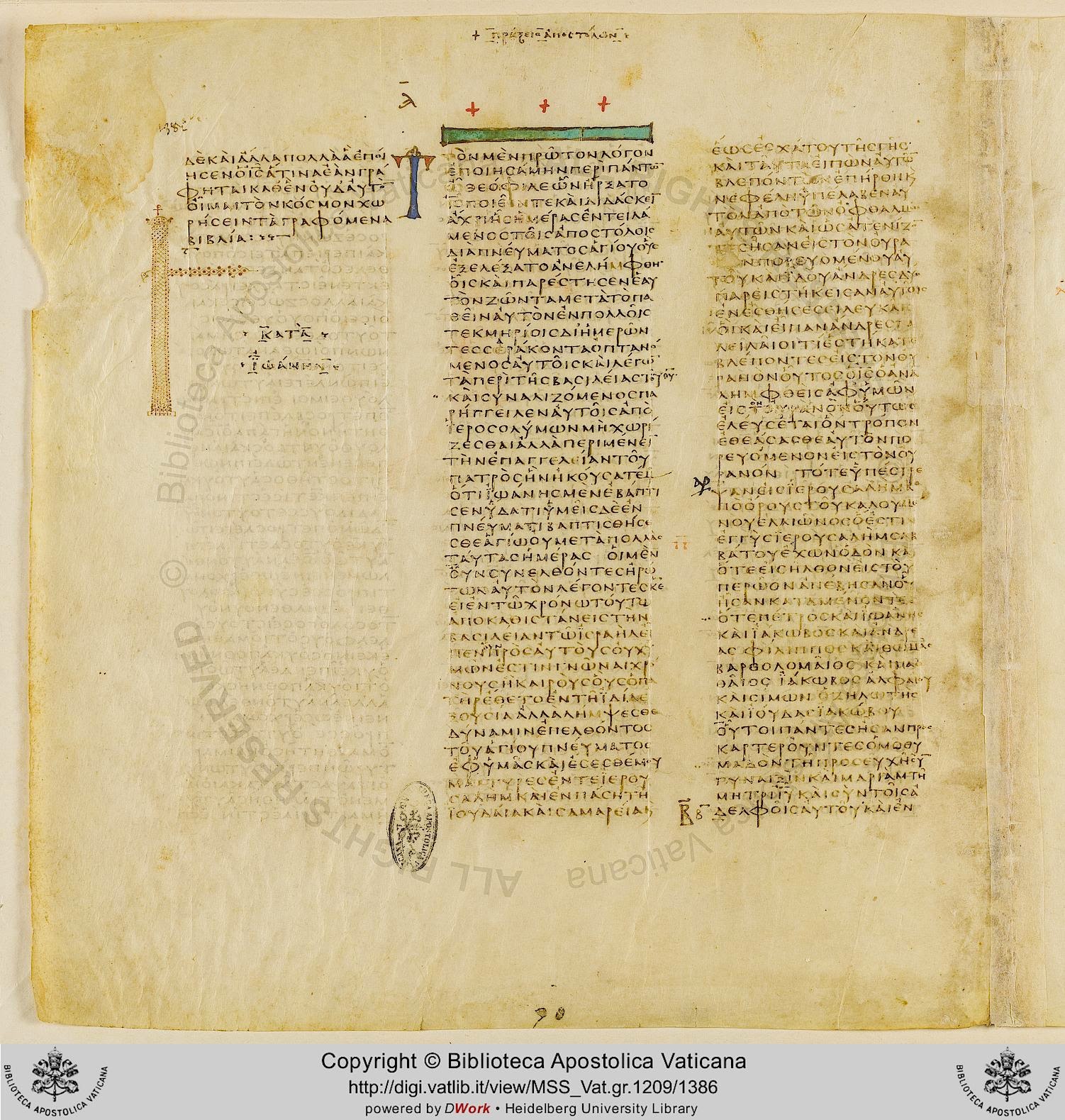 Image:  Ending of John in column one; beginning of Acts in column two.

It is strange to me that so many modern rationalists in the past were able to fundamentally change the New Testament Scriptures. They did this over a whim, and have caused so much confusion and debate throughout the years that is still plaguing the Church.

Jeff Riddle,
A couple of supplemental points:
(1) 304 probably did *not* end the text of Mark at 16:8 when it was in pristine condition. 304's text is essentially Byzantine, it is a commentary-manuscript, and there's no subscription after 16:8. Probably we are looking at the first volume of what was once a bulky manuscript that was rebound to make it less unwieldy.

(2) Contrary to what some commentators have claimed, the blank space in Vaticanus is adequate to contain Mark 16:9-20 *if* the text is written in compressed lettering (compressed lettering like what is seen in Sinaiticus in Luke 1:1-56). See the second image at
http://www.curtisvillechristianchurch.org/AuthSuppl.htm .

Thanks for these insights. I had not heard this about 304 in particular. Hard to believe that the traditional ending of Mark has been abandoned based on such slight evidence.

1. Do you have a scholarly source for an analysis of 304?

2. What is your opinion on why the third column is blank in B?

Maurice Robinson offered an opinion based on a brief viewing of microfilm. But now the MS' microfilm images are online and can be studied in more detail. It's technically not a continuous-text manuscript; it's a commentary-manuscript with the text included.

Because verses 9-20 was not in the copyist's exemplar, but he recollected the verses from another MS he had encountered, and attempted to leave space for the absent verses in case the eventual owner of the codex wanted them to be included.

In Vaticanus, I don't think the flourishes (or arabesques) have any particular significance, although I have not looked into this in detail. In Sinaiticus, the arabesque/decorative line after Mk. 16:8 is particularly emphatic, compared with the scribe's other decorative lines. See http://www.thetextofthegospels.com/2015/09/codex-sinaiticus-and-ending-of-mark.html for additional details.

Jeff,
Just chiming in to share an update.
Digital images of 304 have become available online.
And, as it turns out, 304 is not even a continuous-text copy of the Gospel of Mark. It's a copy of a commentary, and the portion about Mark is based on the commentary of Theophylact, with the text of Mark interspersed between segments of the commentary-portions.

I provided some additional analysis at
http://www.thetextofthegospels.com/2016/05/minuscule-304-theophylact-and-ending-of.html

Any opinion en Dr. John MacArthur position on Mark 16? Thanks!!

It's been awhile, but I addressed this in WM 4: