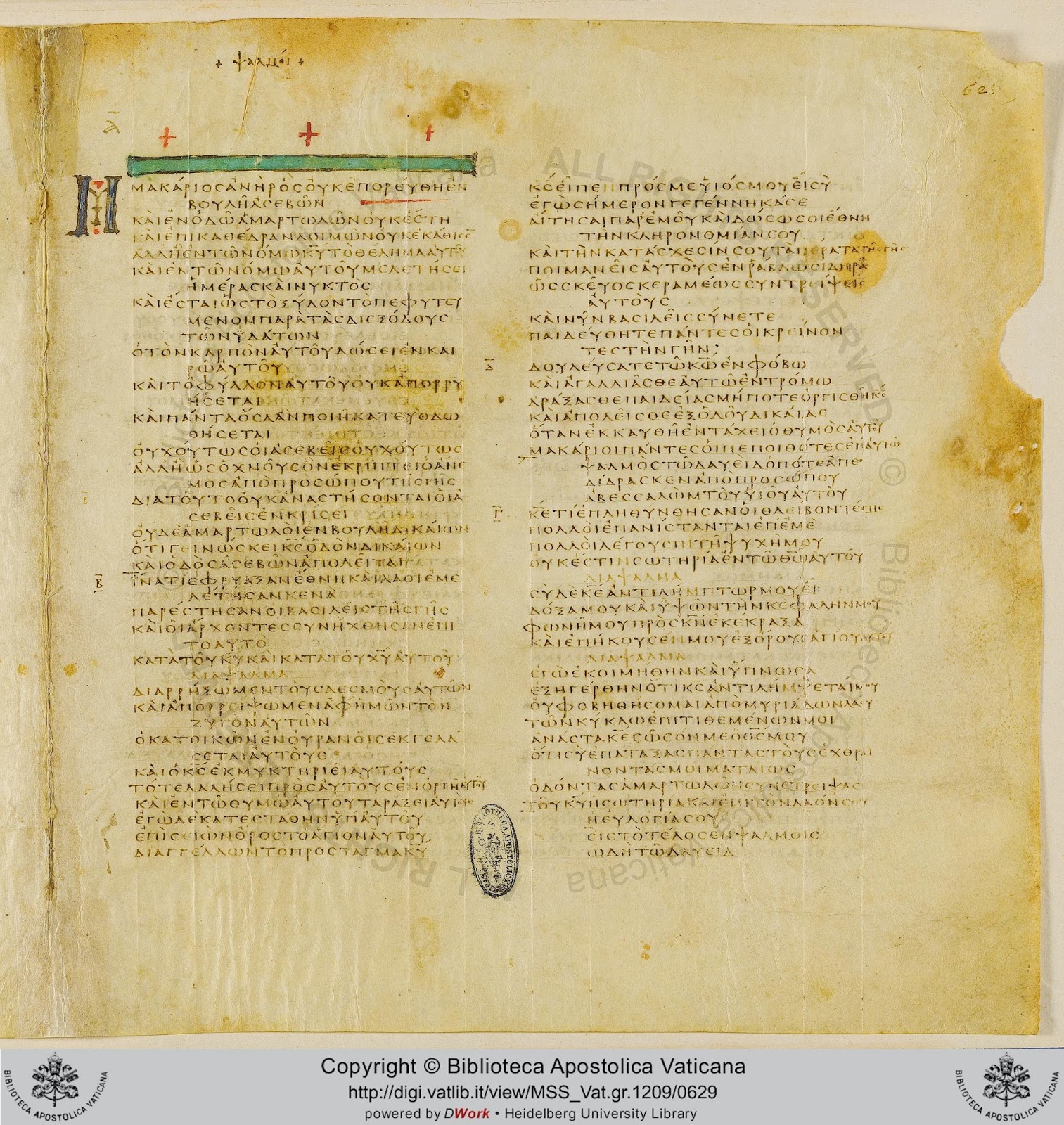 Image:  The opening of the Psalms in Codex Vaticanus

Note:  The digital age is truly amazing.  Codex Vaticanus has been posted online.  Now, you do not have to travel to Rome’s Vatican library to view the codex, or purchase an expensive facsimile, or live near a library which has a facsimile.  Add this to access to Codex Sinaiticus, which has been available online for a couple of years now, and anyone can examine the two codices that have had the biggest impact in dethroning the received text.

I began poking around the codex this morning.  I had recently been interested in finding out how Vaticanus ordered the Biblical books (both OT and NT) and what apocryphal books it included in the OT.  I had not been able to find a complete listing in secondary sources and had not yet been able to visit a library to look at a facsimile.  Now, I can access it with the click of a mouse.

My interest in how Vaticanus orders the OT books is related to the development of canon in the fourth century AD (when the bulk of Vaticanus was apparently written—some sections were obviously written and added later [they appear in a completely different writing script which apparently dates to c. fifteenth century] to fill in gaps in the text, which the online version now also allows one to see in the opening of Genesis and the book of Revelation). There was obvious fluidity in the selection of the Old Testament books and also fluidity with the texts of those individual books.  This is a factor that I do not think advocates of the modern critical text have adequately taken into consideration when they give such weight to Vaticanus and Sinaiticus in determining the NT text.

Here is the list and some notes on the OT books in Vaticanus.  I have not yet taken a close look at the entire text (e. g., examining additions to Esther and Daniel), so some of the info below might need to be nuanced, but here is a preliminary list.

*The titles above are taken from standard English OT usage or from the titles supplied by the online editors (e. g., 3 Esdras) and not necessarily as they are titled in the Vaticanus text. Apocryphal works in red.

Some Notes on the Old Testament canonical order and content of Codex Vaticanus:

1.  The opening order:  Genesis—2 Chronicles follows the LXX order with Ruth inserted between Judges and 1 Samuel.

2.  The apocryphal book of 3 Esdras (LXX 1 Esdras) is then followed by 2 Esdras (Ezra-Nehemiah).

3.   Next is the poetic and wisdom literature from the Hebrew Bible, following the LXX order.

4.  Next is the apocryphal wisdom literature of Wisdom and Ecclesiasticus.  Note that Ecclesiasticus is preceded by a prologue.  Note:  Apocryphal Psalms of Solomon not included.

6.  Next are the twelve Minor Prophets (Hebrew Book of the Twelve) following the LXX order.

7.  Finally, there are the Major prophets.  The “Jeremiah corpus” includes the apocryphal Baruch and the Epistle of Jeremiah.  The Old Testament ends with canonical Daniel (with additions).
Posted by Jeffrey T. Riddle at 12:43 PM

Jeremy,Thank you for posting this. It was exactly what I wanted to know. Due to my perpetual skepticism with regard to men deciding for me what I should consider to be canonical (i.e. Council of Nicea et al) I wanted to find out what other manuscripts might contain some guidance from God that they omitted. In your list I notice there are several apocryphal texts not found. Is that because those were not contained in the Codex Vaticanus?
Thanks again.
Will