It has sometimes been suggested that the Pericope Adulterae (PA; John 7:53—8:11) is merely a “floating tradition” that was never a stable part of the Gospel of John.  This charge is part of the rhetoric aimed at undermining the antiquity, credibility, and authority of the passage.

In Metzger’s Textual Commentary (see p. 221) he surveys a handful of examples of the PA appearing in different places in John and, in one case, in Luke.  Here are the examples he cites:

PA after Luke 21:38     family 13 [aka the “Ferrar group”; about a dozen mss minuscule mss dating from the 11th to 15th centuries and believed to have descended from a common archetype]

According to Maurice Robinson the PA appears in 1,476 mss of John.  So, there are, in fact, only seven examples (counting family 13 as a single example) where the PA is moved, and all of these examples are in late minuscule mss.
Chris Keith of St. Mary’s University College in Twickenham, London is an expert on the PA who published a Brill monograph on the passage in 2009 titled The Pericope Adulterae, the Gospel of John, and the Literacy of Jesus.  When speaking at the PA Conference at SEBTS in April 2014, Dr. Keith said the following:

We can be certain of three things:

2.  Copies of John circulated without the PA.

3.  The only location attested for the PA is John 7:53—8:11 until the ninth century.  It was not a “floating tradition” in early Christianity.

At the same conference Jennifer Knust of Boston University discussed non-textual evidence for the antiquity of the PA including an Egyptian ivory pyxis (small, lidded jar) from the fifth-sixth centuries which depicts the Samaritan Woman at the Well along with the Woman Caught in Adultery. This shows the PA was known early (by at least the sixth century AD), was known in Egypt (i.e., not just in the Western church), and was associated with the Gospel of John (i.e., depiction with the Samaritan woman from John 4 is on the same object with the woman caught in adultery from John 7:53—8:11). 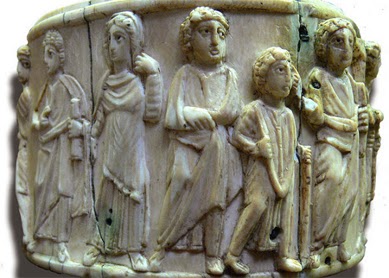 Image:  Side view of the pyxis, focusing on the the woman caught in adultery.

For a discussion of this object and others (like a similar pyxis now in St. Petersburg, Russia), along with various supporting arguments of the antiquity of the PA, see Jennifer Knust and Tommy Wasserman, “Earth Accuses Earth:  Tracing What Jesus Wrote on the Ground,” Harvard Theological Review 103:4 (2010):  pp. 407-446.

Admittedly, neither Keith nor Knust believe that the PA is original to John; however, they do believe that it became a distinct part of John’s Gospel very early in the tradition and that it was not merely a “floating tradition.”

The time has come to put to rest the perpetuation of the idea that the PA did not have a fixed place in or association with the Gospel of John in early Christianity.