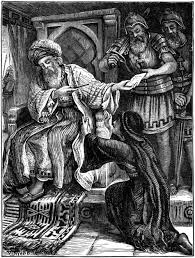 Note:  Last Sunday morning’s sermon was on the parable of the widow and the unjust judge from Luke 18:1-8.  Here are some expanded notes from my exposition of v. 7.


And shall not God avenge his own elect, which cry day and night unto him, though he bear long with them? (Luke 18:7).


Notice how Jesus depicts the elect as being answered as “they cry day and night unto him.”  This is, in fact, a unique Christian insight into prayer.  Prayer is to be constant.  It is to take place day and night. Jesus tells the parable to teach that men “ought always to pray” (v. 1). Notice in the parable that the widow was continually coming to the judge (v. 5).  Consider the urgings of the apostle Paul to the saints:  “continuing instant in prayer” (Romans 10:12) and “Pray without ceasing” (1 Thessalonians 5:17).


In his commentary on Luke 18:7, Leon Morris points out that this is a place where the teaching of Jesus on prayer differed from that of his fellow Jews of his day.  Morris said they “tended to limit the times of prayer lest they weary God.  Three times a day (on the model of Dan. 6:10) was accepted as the maximum” (The Gospel According to Luke, p. 262).  This reminds me of the antitheses (“Ye have heard that it was said … but I say unto you….”) of the Sermon on the Mount (cf. Matthew 5:21 ff.).  Jesus demands even more than the old revelation required.  Not three times daily prayer but constant prayer.  Jesus expected his followers to lead a life of constant prayer and devotion.


Think of how the Christian view of prayer is so different than prayer in other religions. Many think of Islam, for example, as a religion of prayer.  Prayer or salat is one of the five pillars of Islam.  Pious Muslims are expected to pray five times daily, turning to Mecca.  If you have ever watched their prayer times, you may have noticed that every one of the motions, actions, and words in Islamic prayer are sharply prescribed (see this video).  There is not free communication with God as we think of prayer.  Contrast this with what Jesus taught about prayer.  Jesus did not prescribe ritualistic patterns or words in prayer (quite the opposite:  see Matthew 6:5, 7).  Jesus called upon believers to pray not merely corporately once weekly, not three times a day, not five times a day, but Jesus called upon his disciples to pray constantly, to cry out to him day and night.