How to have a warm and welcoming home 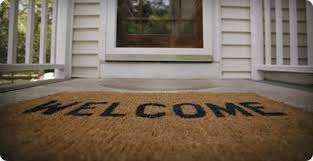 
We begin today a brief afternoon series on personal ministry.  We want to look today at the ministry of hospitality by asking how we can develop a warm and welcoming home.


I.  The Biblical Basis for Hospitality:


Hospitality was highly valued by the saints in the OT.  Consider how Abraham and Sarah received the three men who come to them on the Plain of Mamre:


Genesis 18:2 And he lift up his eyes and looked, and, lo, three men stood by him: and when he saw them, he ran to meet them from the tent door, and bowed himself toward the ground, 3 And said, My Lord, if now I have found favour in thy sight, pass not away, I pray thee, from thy servant: 4 Let a little water, I pray you, be fetched, and wash your feet, and rest yourselves under the tree: 5 And I will fetch a morsel of bread, and comfort ye your hearts; after that ye shall pass on: for therefore are ye come to your servant. And they said, So do, as thou hast said. 6 And Abraham hastened into the tent unto Sarah, and said, Make ready quickly three measures of fine meal, knead it, and make cakes upon the hearth. 7 And Abraham ran unto the herd, and fetcht a calf tender and good, and gave it unto a young man; and he hasted to dress it. 8 And he took butter, and milk, and the calf which he had dressed, and set it before them; and he stood by them under the tree, and they did eat.

And contrast that with the way these same men were treated in Sodom in Genesis 19.  Through righteous Lot gladly took them into his home (19:1-3), the vile men of that city attempted to abuse them.

Recall the pious Shunamite woman in 2 Kings 4 who extended hospitality to the prophet Elisha:

2 Kings 4:8 And it fell on a day, that Elisha passed to Shunem, where was a great woman; and she constrained him to eat bread. And so it was, that as oft as he passed by, he turned in thither to eat bread. 9 And she said unto her husband, Behold now, I perceive that this is an holy man of God, which passeth by us continually. 10 Let us make a little chamber, I pray thee, on the wall; and let us set for him there a bed, and a table, and a stool, and a candlestick: and it shall be, when he cometh to us, that he shall turn in thither. 11 And it fell on a day, that he came thither, and he turned into the chamber, and lay there.

Her faithfulness was rewarded by having her womb opened to conceive a son and then, later, to have that son miraculously raised to life after he died.

When we come to the New Testament we find the same high value given to hospitality.

Our Lord in his earthly ministry had no place to lay his head but he received the hospitality of his disciples.  Consider how Jesus came into Simon Peter’s home:


Luke 4:38 And he arose out of the synagogue, and entered into Simon's house. And Simon's wife's mother was taken with a great fever; and they besought him for her. 39 And he stood over her, and rebuked the fever; and it left her: and immediately she arose and ministered unto them.

And into the home of Mary and Martha:


Luke 10:38 Now it came to pass, as they went, that he entered into a certain village: and a certain woman named Martha received him into her house.

Jesus even received hospitality from those who were not disciples (e.g., it was while  in the home of Simon the Pharisee that the sinful woman anointed his feet in Luke 7).

We also find that the apostles, the first ministers of Christ’s flocks, received hospitality.

The first gathering of believers in Jerusalem after Christ’s resurrection was in the upper room of a home, which might well of been a house belonging to Mary, the mother of John Mark (Acts 1:13; 12:12).

Luke says that in the early church, they broke bread “from house to house” (Acts 2:46).

Peter stayed in Joppa at the home of Simon the Tanner (9:43) who also received messengers from Cornelius (10:23:  “Then he called them in and lodged them”).  Peter then went into the home of Cornelius in Caesarea (10:24-25).

The newly converted Lydia gives hospitality to Paul and Barnabas:

Acts 16:15 And when she was baptized, and her household, she besought us, saying, If ye have judged me to be faithful to the Lord, come into my house, and abide there. And she constrained us.

As does the newly converted jailer:

Acts 16:34 And when he had brought them into his house, he set meat before them, and rejoiced, believing in God with all his house.

Hospitality is presented as a mark or evidence of true conversion!

Paul was constantly receiving hospitality in his missionary travels.  In Corinth, for example, Paul was received and hosted by Aquila and Priscilla:

Acts 18:1 After these things Paul departed from Athens, and came to Corinth; 2 And found a certain Jew named Aquila, born in Pontus, lately come from Italy, with his wife Priscilla; (because that Claudius had commanded all Jews to depart from Rome:) and came unto them. 3 And because he was of the same craft, he abode with them, and wrought: for by their occupation they were tentmakers. 4 And he reasoned in the synagogue every sabbath, and persuaded the Jews and the Greeks.

Another example is godly Mnason:

Acts 21:16 There went with us also certain of the disciples of Caesarea, and brought with them one Mnason of Cyprus, an old disciple, with whom we should lodge.

Paul then, we might say, returns the favor when for two years he was under house arrest in Rome, as Luke records:

Acts 28:30 And Paul dwelt two whole years in his own hired house, and received all that came in unto him,


Hospitality was a general duty expected of all Christians:

Romans 12:10 Be kindly affectioned one to another with brotherly love; in honour preferring one another; 11 Not slothful in business; fervent in spirit; serving the Lord; 12 Rejoicing in hope; patient in tribulation; continuing instant in prayer; 13 Distributing to the necessity of saints; given to hospitality (here the noun philoxenia for hospitality which literally means, “love of strangers”).

1 Peter 4:8 And above all things have fervent charity among yourselves: for charity shall cover the multitude of sins. 9 Use hospitality (the adjective philoxenos, “hospitable” is used here) one to another without grudging. 10 As every man hath received the gift, even so minister the same one to another, as good stewards of the manifold grace of God.


Hebrews 13:2 Be not forgetful to entertain strangers (literally:  forget not hospitality, philoxenia): for thereby some have entertained angels unawares.

However, Christians were to be discerning and not welcome false teachers:

Hospitality is also especially expected of elders.  1 Timothy 3:2 says the bishop is to be “given to hospitality” and Titus 1:8 says an elder is to be a “lover of hospitality.”

1.  It provides a practical means to facilitate ministry, whether opening your home to a church meeting or keeping a visiting minister or brother.

2.  It provides an opportunity for deeper fellowship and koinonia.

3.  It aids in our discipleship by giving us a concrete opportunity to serve.

4.  It exposes our family to ministry and to fellow believers.

III.  How do we make our home a warm and welcoming center of hospitality:

1.  By recognizing that hospitality is a basic Christian opportunity for ministry and service.

2.  By having a willingness of spirit to extend hospitality (becoming a “lover of hospitality”).  In practical terms, volunteering to offer your home to Christian service when needed (hosting church meetings, welcoming fellow members into your home, keeping visiting ministers or missionaries).

3.  By creating space in your home so that you can extend hospitality.  Don’t have so much clutter that there could not be a meeting space in your home (which need not be large).  Some can set aside a room as a true guest room, as the Shunamite did.  They might keep a guest log to register the visitors they have and periodically pray for them.  Others do not have the space for a room set aside, but they can have a plan (e.g., guests will stay in the master bedroom while we move into the children’s room).  If you do not have a plan to host, you will be less likely to host.

4.  By keeping your home neat and tidy enough (though it need not be like a museum) to be able to welcome guests even unexpectedly.  Some are held back from opening their home for fear of being judged.  We should not hold impossibly high standards.  If our home is like a museum, then folk will not feel comfortable staying there.

5.  By seeking to learn about those who visit or stay with you (asking questions about them and showing interest in their lives and making reasonable accommodations to their needs [special meals for diabetics, etc.]).
Posted by Jeffrey T. Riddle at 12:45 PM

This is an excellent post. I don't know that I have ever heard this preached or taught. Thank you for sharing!

Thanks for the comment. Sorry I have not been in touch for a while. Hope you are well. If you come to Virginia, let us know and we'll try to put the article into practice.